“With ksnhiahzdr
Justice for All,” a blog about what’s wrong with our sex offender laws, ran this piece about how over the top our fears can go. The blogger, Shelly Stow, consistently nails the media for its craven habit of jumping on any sex offender-related item and turning it into something so scary that it allows us to go about our day feeling Â outraged, terrified and angry — three emotions we can’t Â seem to get enough of. Embarrassingly enough, the piece she links to is from the paper I worked at for 14 years, the New York Daily News:

The headline screams,Â “Florida complex for sex offenders blasted for selling children’s toys at yard sale.”Â  Apparently the Lighthouse Mission, a halfway house for released sex offenders in Florida, was having a yard sale of used and donated items. Among these items were “Stuffed animals, baby toys and strollers….”

The implication given is that the registrants deliberately included items attractive to children in an attempt to lure them within their reach.Neighbors were up in arms, rushing to protect neighborhood children from the danger lurking just inside the door of the mission, danger in the form of registered sex offenders.’
The truth, of course, bears no resemblance to that.The mission, which helps registrants rehabilitate and find employment, is run by a mother and daughter. They hold several of these sales a year, and their tight-stretched budget is dependent on them for income. According to them, several of the resident registrants helped move some of the heavier items before the sale began. They were not involved with the sale at all.But what if they had been? Would children be at risk? Does the near–and mere–proximity of those who have committed any of a myriad of registerable offenses, served prison time, and been released automatically put children at risk? All available studies and research says no.Of course, those frantically concerned neighbors would not know this. Chances are high that they are ignorant of what the literature says on the subject. No, all they need to know in order to spring into action and, ultimately, force the closing of the yard sale, is that sex offenders are somehow involved.

It would be an odd garage sale indeed if children were being dragged off while their parents looked at used golf clubs and toasters. But fear sells. Only in this case it doesn’t sell any items for charity. Only newspapers. – L
. 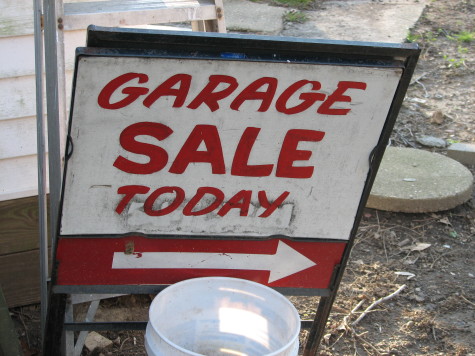 Come and get your slightly used children!

.
Cops Haul 7 year old to Station for Playing in Park. Mom Charged with Child Endangerment
Is it “Rape” To Hold Someone’s Hand without Explicit Consent?

20 Responses to Of Sex Offenders and Garage Sales