Readers rnedfsersa
— Here’s the story of a girl who had a great summer, thanks to confident parents, an abundance of local kids and a dearth of 911-dialing neighbors. It was a good reminder even for ME that kids can be on their own a lot more than we’ve gotten used to, or even feel comfortable with. – L

Dear Free-Range Kids: As a Free-Range mom who was raised Free-Range herself, I just had to share this story.  We live in Southern California, about 30 miles north of San Diego, in a city of 150,000.  This summer I decided to let my 8-year-old daughter follow in my childhood footsteps, and spend the summer at home alone.  I was originally planning to enroll her in some day camps for, but since none of their hours worked with my work schedule and they were a reach, financially, I decided to let her find her own fun for 12 weeks.

My husband and I work close to home, so God forbid there would be some HORRIBLE CATASTROPHE (GASP!!!), both of us could be home within 10 minutes.  So, armed with a pre-paid cell phone, a house key on a lanyard, and some good common sense from being raised Free-Range her whole life, my 8-year-old set out for her summer of freedom (and fun!).

With the exception of my husband coming home for a half hour at lunch each day, my 8-year-old was alone from 7 am to 4:30 pm Monday through Friday.  Most days I would get home at 4:30 and I wouldn’t even see her until dinner rolled around at 6 or 7.  Why?  Because she was out with her friends, HAVING FUN!

Thank goodness there are a lot of kids in our apartment complex whose parents apparently are Free-Rangers as well.  My daughter and her buddies went swimming at the pool, rode their bikes and scooters, and even made good friends with the ladies in the rental office.  They invented a “dirt board,” which is basically a skateboard without wheels, and went dirt boarding on the hill behind our building.  They even explored the wooded ravine that borders the back end of the complex.  And by far the coolest thing they did was when they discovered a rainwater overflow pipe, about 4 feet in diameter, that runs from the ravine, under the 4-lane freeway that borders one side of the complex, and out into the shopping center on the other side.  Yes, she and her buddies played in that pipe, and no one got cut, scratched, or abducted by child molesters who were lurking underground, just waiting for some 8-year-olds to come stumbling through!

Did I worry about her being home alone all day for 12 weeks?  I’ll admit that once or twice I did have a thought or two about “What if?”  But I reminded myself that my daughter is smart, capable, and has a good head on her shoulders.  She knows what to do in an emergency, and she knows how to use her head and her common sense to make safe choices.  Why?  Because I raised her to think for herself.  And you know what?  She had a blast. – One Delighted Mom 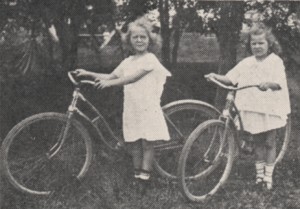 Spending all day outside with friends didn’t used to be a radical act.

42 Responses to On Her Own for 12 Weeks Over the Summer: An 8-year-old