This trekdsyrfi
essay at Nature Play Nanny gets at one of my pet peeves: nature visits that treat the great outdoors like the Louvre — magnificent, precious, and only to be appreciated with a guide:

â€œWhich group are you supposed to be with? Are you here with a parent? Where is your mom?â€

I heard the woman snappishly asking these questions, but at first I didnâ€™t realize she was speaking to one of my children. We were at one of the nature centers we visit frequently, and the woods were buzzing with groups of school kids. One of the groups was being led by a naturalist, through the nature exploration area, after being told that they were not to stop and play. The woman with all the questions was either a teacher or parent.

It seems like every time we visit this particular nature center, the kids are questioned like this by some overly Â concerned adult. Iâ€™m not sure why this irritates me so much, but it does.

My teeth are gritting along with the blogger’s, who makes a point that is so wise: While the naturalists encourage kids to come back another day, really — what would motivate the kids to do so?

I think itâ€™s unfortunate that they donâ€™t stop and let the children play while theyâ€™re there. The visits come with a limit on time, so I understand why they canâ€™t, but Iâ€™m sure the children would benefit more from fifteen or twenty minutes of nature play than they would from the worksheets theyâ€™re rushed back to school to complete.

Anyway, on this particular trip, the kids DID get a chance to encounter a piece of wood:

First, they made a seesaw by positioning the wood across a log. The wood wasnâ€™t quite long enough for the seesaw to be lasting, so next, the they made several attempts at creating what they called a launcher.

I am trying to be aware of the times where I barge in and tell them the best way to do something, rather than let them figure it out on their own through trial and error. It was difficult to sit back and watch them struggle with the launcher, until I realized they werenâ€™t getting upset about the failed attempts, but were instead able to see for themselves the changes they needed to make in order for the launcher to work.

You can read what the kids finally did with the wood here. It’s not like they invented the Large Haldron Collider. But what they did do was play — that weird, old-fashioned thing that involves time, creativity, goofing up, and adults…standing back. – L. 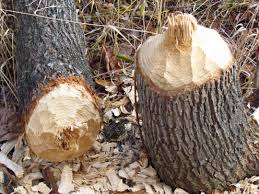 A Leave it to Beaver-era moment in the woods.

Screaming and Laughing: Something You Still Hear?
Clearly, A Ranting, Videotaping Stranger Cares More About this Woman’s Own Baby Than She Does