Hi kaeafeabhr
Readers! Here’s a cool observation and a request for more, by way of Dawn Siff, a New York CityÂ producer, blogger and vlogger who tweets @momlandia. – L

Dear Free-Range Kids:Â I love the show “Parenthood,” which is produced by Ron Howard and Brian Grazer. It’s a sappy hour-long drama that very loosely follows the premise of a movie by the same name, which came out in 1989 and starred Steve Martin and Mary Steenburgen. I never miss an episode. I think it’s wonderful and even pretty realistic in its dialogue and depiction of family dynamics.

I have noticed, though, when watching the show, that helicopter parenting is rampant. Spoiler alert if you are not caught up on some more recent episodes.

One of the main characters, Kristina Braverman, has just been diagnosed with breast cancer. She needs a lumpectomy right away. The soonest her surgeon can get her in is the same day that her son, Max, is giving a speech because he is running for president of … wait for it … Â his middle school. There is lots of hand-wringing over the date. She initially schedules her surgery for a much later date, over the objection of her husband and her surgeon, so she won’t miss Max’s big day. It is important to mention here that Max has Asperger’s. Why is that important to mention? It is actually not. It has nothing to do with anything; he needs his mom to be healthy just as much as a kid who doesn’t have Asperger’s. But it does provide a comic moment when he tells his mom he doesn’t care that she can’t come because,Â “You can’t vote anyway.”

Eventually Kristina’s husband prevails upon her to take the earliest date for the surgery. And big sister flies to the rescue, coming in from Cornell to attend Max’s speech and give him a big thumb’s up from the back aisle. Whew!

Haddie, the big sister, wants to help her parents, but they keep refusing her help and and treating her like a child even though she has displayed some very adult behavior: booking her own flight and flying Â across the country to help out, after being told to just “focus on your schoolwork.” She has even called the admissions office and figured out that she can withdraw for the semester, get a type of family medical leave from school AND get her parents a full refund for the financial costs of the first semester “including the dorm costs.” (Imagine a kid caring that her parents get a full refund!)

But they won’t hear anything of it and keep telling her to go back to school. They even lie to her at the end of the episode and tell her that her mother is cancer-free when she’s really facing rounds of chemo because her cancer has spread.

I’m sure the writers are just setting this up for dramatic purposes and that this young woman will eventually convince her parents they need her help and to treat her like an adult, but the motions are just exhausting. To me this is just a reflection and further normalization of helicopter parenting in our society. Now that I’m noticing it, I’m guessing there are examples in many other shows and I’m wondering if your readers have noticed as well. If so, let’s hear about them! — D.S. 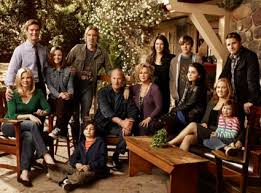 A Halloween / Sandy Story You’ll Love
Road Worker or Pre-Schooler? The Vest is The Same