Folks: I am more than impressed by this zydbiyyfbd
piece on the Today Show blog about criminalizing parents who let their kids wait in the car during a brief errand. As you know, this is a topic we talk about here a lot, and one of our stories — this one, about Christina Moon — caught the eye of writer A. Pawlowski, who then wrote a story about it (and got 400 comments). Pardon me for featuring the chunk that quotes yours truly:

“I feel as if we’ve criminalized something that we all know in our heart of hearts is generally safe,” said Lenore Skenazy, blogger and author of “Free-Range Kids, How to Raise Safe, Self-Reliant Children (Without Going Nuts with Worry).”

“I do think it’s dangerous to leave a child alone for a long time in a car. I also think that a parent is capable of deciding if it makes sense to leave her kids in the car for the duration of an errand.”

Most people remember waiting in cars while their parents ran a few errands, a practice that wasn’t “crazy negligent” then and still isn’t now, she added.

Fennell [spokeswoman for the group Kids and Cars] countered there are many dangers lurking inside a car besides the obvious risk of heat stroke. If a car is running and the kid is playing with the power window switches, he could strangle himself if he sticks his head outside. Children who’ve been watching mom push the buttons on the dashboard could try the same and knock the car into gear. All those scenarios have actually happened, Fennell noted.

“It’s interesting when people are justifying that ‘I know my child, I know what’s best for my child, I’m the parent,’ but maybe they should sit on our website for an hour,” she said.

“They’re putting their own convenience ahead of the safety and well-being of the children and people don’t like to hear that. Those are tough words.”

But Skenazy cautions against “worst first thinking,” or immediately coming up with the very worst-case scenario – heatstroke, kidnapping or carjacking — and proceeding as if it’s likely to happen. Parents want to keep their kids safe more than anybody and if they decide it’s OK to leave a child in a car while running an errand that won’t take too long on a day that’s not too hot, the odds show they are right, she said.

Skenazy also has disdain for people who call the police right away when they see a child alone in a car, instead of waiting a few minutes to see if a parent will emerge.

“The idea that you should always get the authorities involved strikes me as less Good Samaritan and more KGB,” Skenazy said.

How great to have both sides represented. Read the whole piece here! – L. 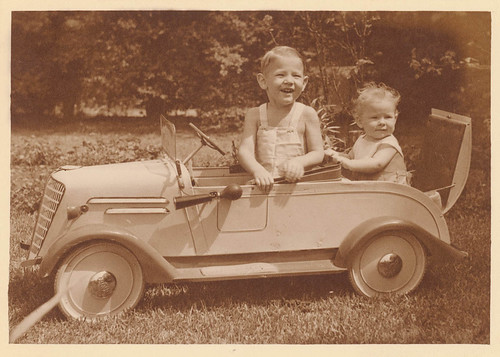 Kids in cars: Not always hell on wheels!

A Fall from the Swings & a Le$$on in Medical Economics
Help Needed: “My 7-y.o. is Too Scared to Do Anything On His Own”