Merry Christmas to everyone who’s celebrating, and a Happy New Year to all! I appreciate the Bible passage that a commenter sent here, below. It reminds us that throughout history, parents have lost track of their kids from time to time. What’s more, often a child only discovers his true interest — even his calling — when left to his own devices. (Or hers, of course.) (Or His.)

Meantime, special wishes to Maria anhrsyidsk
Hasankolli, who is still facing criminal charges for sleeping through a morning that her son got himself ready for school and started walking there on his own. Let’s dedicate ourselves to protecting all the imperfect but still perfectly fine parents out there, and all the kids who deserve some free, unsupervised time to explore this glorious world.

[41] Now his parents went to Jerusalem every year at the feast of the passover.
[42] And when he was twelve years old, they went up to Jerusalem after the custom of the feast.
[43] And when they had fulfilled the days, as they returned, the child Jesus tarried behind in Jerusalem; and Joseph and his mother knew not of it.
[44] But they, supposing him to have been in the company, went a day’s journey; and they sought him among their kinsfolk and acquaintance.
[45] And when they found him not, they turned back again to Jerusalem, seeking him.
[46] And it came to pass, that after three days they found him in the temple, sitting in the midst of the doctors, both hearing them, and asking them questions.
[47] And all that heard him were astonished at his understanding and answers.
[48] And when they saw him, they were amazed: and his mother said unto him, Son, why hast thou thus dealt with us? behold, thy father and I have sought thee sorrowing.
[49] And he said unto them, How is it that ye sought me? wist ye not that I must be about my Father’s business?
[50] And they understood not the saying which he spake unto them.
[51] And he went down with them, and came to Nazareth, and was subject unto them: but his mother kept all these sayings in her heart.
[52] And Jesus increased in wisdom and stature, and in favour with God and man.

Peace on Earth! (Which, by the way, were the only words on a sign a Free-Range reader put on her desk the other day. She was told she had to take it down, because “it might offend someone.” I interviewed the reader by phone, but because she feared for her job, she didn’t want to go public.) — L. 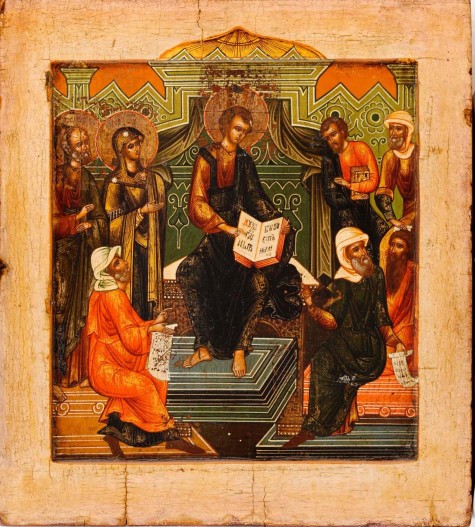 How fortunate that Jesus lived before anyone could call 911 to report His parents to CPS.

What Happened When I Asked My Kids to Bike to School
Again with the Fever Thingy?

27 Responses to Parents Leave 12 y.o. Behind After Festival for THREE Days! Why Didn’t Anyone Call 911?