Hi htykhnbybd
Folks — The other day I was visiting friends in Rye, NY, where darned if kids weren’t playing outside,unsupervised, even making up their own games. Our host challenged me to find out: Why? Why are some neighborhoods still Free-Range, Â while others aren’t? I decided to ask that question of the folks in the RV’ing world, a Free-Range culture if ever there was one, and here’s part of my the piece I wrote up for the Huffington Post:

Why Do Helicopter Parents Loosen Up at Campgrounds?

Most of us remember playing outside till the streetlights came on, but our kids can’t because of any of the following fears: crime, creeps, traffic, tennis lessons, homework… or all of the above.

Except at RV campgrounds. (And probably regular campgrounds, too. But I haven’t been to those.) At RV parks, kids run around like it’s still the Sputnik era — all ages, unsupervised. But if they were back home, even in safe suburban neighborhoods, chances are they’d be inside, or at least at soccer.

So, what happened to the helicoptering? As a gal who spends most of her timeÂ trying to convince parents to loosen their terrified grip, I’ve been asking around, and I think it boils down to:

1. Cramped Quarters
“A family of four in 429 square feet is different than a family in 2000 square feet,” says Eric Gaden. He’s a traveling nurse — yes, a nurse who travels to temporary gigs in his RV, with his wife and sons 5 and 8. They’ve been on the road for four years now, and whenever they land at a new campground, he says, his kids discover “the hiding places and secret places the adults will never see.”

That’s in part because the adults are busy kicking the kids outside. “When we lived in a house I could say, ‘Go to your room!’ But here they’re just six feet further away,” says Gaden. So out they go. And a child in nature tends to remain in nature.

2. Other Kids Very Close By
“The other day I was going around the campground and there were five little kids, probably 6 years old — three boys and two girls — on the dock, fishing, and there were no parents anywhere,” says Dave Schneider, owner of theÂ Indian Trails Campgroundin Pardeeville, WI. Once there are a few kids outside, others join them. But in the ‘burbs, often the only kids in the park are part of a program, like Little League. Here, everyone’s footloose, so kids can swarm. And fish. 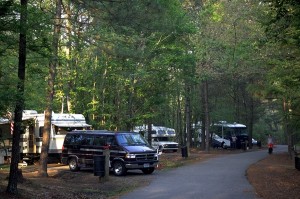 Oh — and don’t forget another reason: Being closer to nature seems to make people open up.

33 Responses to Parents Let Kids Free-Range at Campgrounds. What Can That Teach Us?