From rkbzfryiiz
“Let the Kids take Risks When They Play,” by Peter Gray (one of my heroes, author of the basic psych textbook used in colleges across the country, as well as the book Free to Learn) in The Boston Globe:

…Over the past 60 years, we’ve seen a huge decline in children’s freedom and opportunity to play on their own. Over this same period, we’ve also seen a dramatic increase in the rates of depression and anxiety disorders among young people — five to eight times what they were in the 1950s, based on standard clinical questionnaires given to normative groups over the decades.

Our children — and the young of other mammals — love to play in moderately risky ways. Through such play, they acquire the physical, social, and emotional capacities required for healthy development. They learn to get along with one another by playing socially, and they learn to deal with emergencies by playing in ways that entail risk. For example, young monkeys playfully swing from branch to branch, high enough up that a fall would hurt; goat kids run along cliffs and leap awkwardly into the air, so that landing is difficult. Young mammals of many species playfully fight and chase one another, and they occasionally get hurt in the process.

Why is such play so attractive? It can cause injury, so why hasn’t natural selection weeded out the innate desire for it?

We have some clues from laboratory experiments. Researchers have found that when young rats or monkeys are deprived of play during critical periods in their development, the animals grow up as emotional cripples. They are psychologically paralyzed when placed in novel, slightly frightening environments to which normally raised animals would adapt. They alternate between incapacitating fear and inappropriate aggression when placed with unfamiliar peers. So it is no surprise to me that play-deprived human children grow up lacking the social and emotional skills required to deal well with life’s inevitable stressors. They may also grow up deficient in the abilities to think creatively, take initiative, and assume responsibility.

We have deprived children of free, venturesome play, presumably for their own good, but in the process we have denied them the opportunity to learn how to be resilient by playing in risky, emotion-inducing ways. 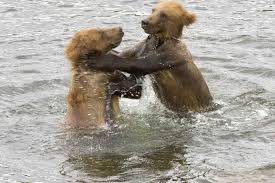 All animals play. Only humans deprive their kids of this.

The Decision Not to Babyproof
Do We Really Have to Read to Our INFANTS?

61 Responses to Play Time Down, Anxiety Up. Hmm.