Hey Readers — Hadn’t realized there was a tempest in a toy robbery going on in England, where the sainbbsfhb
media are reporting anger at Playmobil’s age-old cops and robbers set:

Wearing dark glasses, the blonde dolly points her pistol at the smiley bank manager as he happily hands over the cash.

Itâ€™s just one of the fun blags four-year-old kids can act out in Playmobilâ€™s Bank and Safe set â€“ and it is getting anti-gun campaigners all fired up,Â the Sunday PeopleÂ reports.

Other scenarios include a gold bullion raid and cash machine heist.

An anti-violence activist is then quoted as saying that a toy like this sends the wrong message. I can’t tell if this is just one fellow or if he has other supporters. He may not.Â But either way, it bears noting that if mini plastic miscreants send the wrong message, so did all the fairy tales I read as a kid, which reveled in witches trying to make kids into dinner, or at least give them carbuncles. (A favorite word from my youth.)

Sometimes I despair at how literally we are taking childhood. Think of the boy suspended for lobbing an imaginary grenade during an imaginary war the other day. This stuff isn’t dangerous — it’s normal, even good. How I WISHED I could have had all the powers of a witch as a kid, and how many hours I spent pretending that I did. Did this turn me into Â a witch? (You are not allowed to answer that if you are troll…which is the way it works in the fairy world, too, by the way. Witches rule.)

Anyway, to lock up all the Playmobil bandits won’t make us any safer because…they’re PLAYMOBIL BANDITS. Â – L.

P.S. Scroll down onÂ this linkÂ for the Facebook discussion of the set. 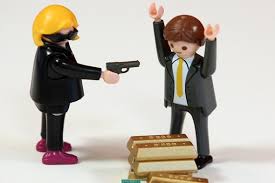 Help! Help! Oh, won’t the thought police come save me?

Helicoptered Kids More Depressed as Young Adults
Don’t Give Your Kids the House Keys Till They’re 16?