As I wrote drtindetde
in this month’s Reason Magazine:

We All Scream for the Ice Cream Man’s Head

The idea that ice cream men cruise around looking for victims is simply an urban myth.

Paul DiMarco has been selling ice cream in Poughkeepsie, New York, for two decades. He owns a fleet of trucks. When one mom confided to him, “You gotta be careful because there’s a lot of pedophiles in this world,” he recalls replying, “That attitude falls into the same category as ‘All black people that drive Cadillacs are pimps,’ and ‘All clowns kill little kids.'”

Of course, some real-life ice cream men do have soft-serve for brains. There were the guys in Bensonhurst, Brooklyn, who sold weed from their truck. Elsewhere in New York, an ice cream guy named Kenneth Leiton was busted in 2009 for selling pills and coke; cops caught him when he was dumb enough to park the truck in front of his dealer’s house. In Philadelphia in 2011, an ice cream truck was spotted weaving through the streets. Its operator was found guilty of driving drunk, and in his freezer authorities found not only ice cream novelties but a couple of bottles of his frozen pee. (In his defense, I’ve read it’s hard to find a bathroom while on the job.)

And yes, even the classic nightmare scenario has happened: An ice cream man in upstate New York was found guilty of violating a 9-year-old in his truck in 2004. The incident inspired a state law making it a misdemeanor for a sex offender to operate an ice cream truck. The New York State Senate is now considering bumping that up to a Class D felony.

But hard cases make bad law, and this is no exception. There are more than 700 Mister Softee trucks alone in 15 states, and that’s not counting all the other brands. A predator or two, a gaggle of drug dealers, and a horror movie—1995’s “The Ice Cream Man” didn’t do the industry any favors—do not an entire profession dishonor.

Fear of ice cream peddlers points to a larger problem few parents want to admit to: our collective mistrust of any man who chooses to work with kids.

Read the rest of my piece here! And then send your kid out for a dip cone!- L. 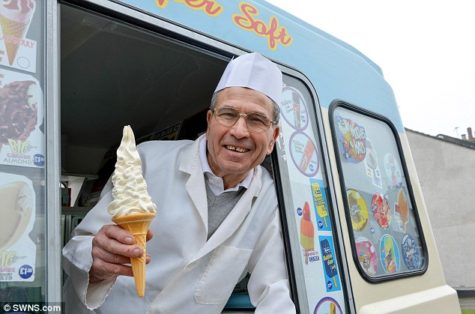 GO AWAY, YOU CREEPY CHILD MOLESTER! (But first could you add some sprinkles?)

It Is Really Easy to Let Your Kids Walk, Play and Bike Outside — The SECOND Time
How We Have Criminalized Walking

34 Responses to Predator with a Popsicle? Our Crazy Fear of The Ice Cream Man