Readers — Lest you think America is alone in going plumb crazy with worry for its kids in almost every situation, take heart! Australia is at least as terrified! As the dynsrheyzh
newspaper The Age reports:

Parents who leave their children unattended in a car or at home face harsher fines and double the jail time under proposed laws.

New legislation will be introduced on Wednesday that will mean any parent leaving a child under the age of 12 unattended could face a jail term of up to six months or fines ofÂ $3690. It is not limited to cars and homes but means anywhere a child is left alone.Â

Previously the fine was $2214 or a maximum of three months’ jail.Â

Naturally, the impulse behind this legislation is fear for kids who die when unattended, particularly when in cars. In “recent years,” the paper reports, there have been two counts of this in Victoria, one of the six states of Australia.

That sounds like perhaps one a year, or perhaps even a couple years with no deaths. For this, Victoria appears poised Â to criminalize all parents who trust their kid will survive in the car while mom runs in to pick up the prescription, as well as all parents who let their kid watch half a Harry Potter movie while they go to the grocery. Victoria’s seriously delusional Premier Denis Napthine is quoted as saying:

By “held up” I’m sure he must have meant detained, because of course if you are held up as in a gas station robbery, it’s probably best NOT to have your kid with you.

But really, Denis, what are the odds that when you are paying for your gas you are going to end up spending hours and hours while your car sits at the gas pump? Is there any connection at all between your fear and reality? Do you really believe it is always MORE safe to take a kid, or two, or three out of the car and across the gas station, vehicles zooming in and out, than it is to leave the kids Â safely strapped in their carseats for the incredibly brief amount of time it takes to pay for petrol?

Meantime, can we talk about the “danger” of having an 11 year old stay home alone for any amount of time, which I guess could mean a few hours or even just a few minutes? As commenters here have noted before, Â many of today’s parents remember babysitting at age 11. Heck, I was interviewed yesterday by a TV host who said she babysat at age 10! (Which reminds me, I’ll be on 20/20 this Friday night, talking about — what else? — kids in cars.)

Victoria: Come to your senses before you criminalize good parents making good decisions. Is that so much to ask? – L.*

*NOTE: The story sent to me yesterday from The Age has been updated to include a bunch of new caveats. When clicking on the link you can only get the new version now, though my quotes are from the older one. 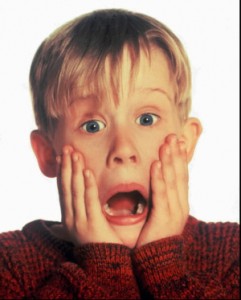 Note to lawmakers: This was not a documentary.

An Insane Focus on Safety, Including The Hazard of “Eating Bread”
Greeter at Walmart Calls 911 on Dad She Thought was a Kidnapper

59 Responses to Prison Time for Letting Your 11 Year Old Stay Home Alone or Wait in Car?