‘Tis the season to celebrate the coming of summer and what was once, the old folks say, a season of free time for kids. Time to ride their bikes, walk to the store, and learn whatever games everyone in the neighborhood was playing, from spit to baseball to Barbie.

To see how valuable that unstructured, unsupervised time is, read this ksfdrnzbtb
essay by Peter Gray, author of Free to Learn. But to help bring it back, why not take your kids to Â your neighborhood park on Saturday at 10 a.m. and leave them there. Or (I know, I know) have them arrange to have a buddy with them. It’s a holiday dedicated to re-seeding the outdoors with kids, so they start to take root and flourish there, as they once did.

As I wrote about this holiday — now in its 7th year — a while back:

The Free-Range holiday, Take Our Children to the Parkâ€¦and Leave Them There DayÂ Â is celebrated just the way it sounds: We all take our kids to our local park and, if theyâ€™re 7 or 8 or older, leave them there for a while, starting at 10 a.m.Â That way, they meet up with other kids from the neighborhood â€” even ones that go to different schools.

After we wave goodbye, the kids will have to come up with something to do without an adult directing them. Â This may be a completely novel experience. But by the time theyâ€™re done Â â€” half an hour, or even half a day later â€” chances are theyâ€™ll want to do this amazingly fun thing called â€œplayingâ€ again. So Sunday becomes unofficialÂ â€œOur kids are going to the park on their own day,â€Â  as do Â most days thereafter. Suddenly, the empty parks are full of kids again!

If youâ€™ve got younger children, you can participate, too. Just sit on the bench while they play. Your presence creates the kind of community that reassures the parents leaving their older kids there.

This simple, old-fashioned idea will, of course, seem radical to some. They will say they loved playing on their own when they were kids, but now itâ€™s too dangerous. Please show them this Pew study on gun violenceÂ that states: â€œFirearm homicide rates in the late 2000s were equal to those not seen since the early 1960s.â€ Â Thatâ€™s right â€” gun crime is down to the level it was BEFORE COLOR TV.

And yet: 1 in 4 kids, ages 6 to 12, NEVER goes outside without a parent.Â The outdoors is treated like supervised yard time at prison.

Fight the misplaced fear that has kept kids indoors or only in supervised programs.Â Go forth to Facebook and Twitter and the PTA to spread the word about Take Our Children to the Parkâ€¦ and Leave Them There Day!

And tell us how it goes! 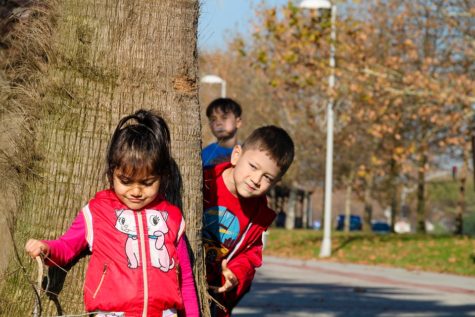 This is not a historic re-enanactment. Kids can be doing this RIGHT NOW.Â

holiday, Take Our Children to the Park

Helicopter Parents Hope to Stave Off Death By Doing Everything “Right”
The Tragedy at Kroger: A 6-year-old Dead