Readers rzrdzhezks
— Let this not be the future of fun (from The Toronto Star):

Staff and Grade 8 students at an inner-city Toronto school were looking forward to the three-day graduation trip to an idyllic nature camp in Eastern Ontario — until they were informed they couldn’t canoe, kayak or try archery.

And swimming, rope activities and campfires? Only if “sufficient proof of safety” was provided ahead of time, along with “a script of safety routines and insurance in case of injuries.” With the requested documentation and swim tests near-impossible to complete before kids were to leave June 10, the trip fell to pieces, staff say.

Instead, the kids will get a standard-issue one day trip to Niagara Falls.

So much for connecting with nature, trying new activities and having a mini-adventure. And last year, when I spoke at the Society of Camp Directors convention in Ontario, I met this camp’s co-owner, Sol Birenbaum, who’s the most dedicated, kid-centered Free-Ranger on earth. In the article he is quoted saying:

“Amesbury was one of the first schools to come to Walden,” said camp co-owner Sol Birenbaum. “That was seven years ago, and we were so proud they trusted us to send their kids to us.”

Now, about 31 schools visit each year, and he’s not aware of any disapproving the camp, though some do opt out of activities or send questions ahead of time requesting safety information.

He said the camp’s safety requirements exceed those of the school board.

“Somewhere, there was a breakdown,” he said, adding he’s reached out to the school “because this particular program is so special to us, we wanted to let (the superintendent) know that we are willing to do whatever it takes to reinstate this case.”

But he did not wish to lay blame. “I think this is a paperwork problem, not a person problem.”

“If me and the teacher and the superintendent were sitting around a table, we could hash this out in four minutes, but that’s just not the way it works.”

Why can’t that be the way it works — caring people, sitting around, making good things happen? Why is “thinking of the kids” so often interpreted as, “thinking of ways to stop them from doing things,” as if that’s more responsible than trying to resolve the issues and go forward? 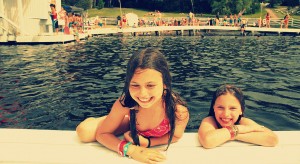 What are KIDS doing here??? (Photo from Camp Walden website)

Dad Gets 1 Year Probation for Making Son Walk a Mile
7-Hour Lockdown, Students Peeing in Bottles, Because Someone Heard Something About a Gun