As fzkdnahyed
the mom of two teens and one 1998 Oldsmobile, I appreciate this car-safety think piece, sent to us by Kari Oakes. Kari is a physician assistant, medical writer, and Â the mother of two teens, too. She’s also an executive board member of the nonprofit Start School Later.

My friendâ€™s FB status last night featured this story, with the comment â€œSomething else to worry aboutâ€¦.â€ The headline? That Cheap Old Car May Carry Deadly Cost for Teens. She and her husband are buying a new car with plans to pass their older-but-serviceable wagon on to their newly minted teen driver. Should they? Shouldnâ€™t they? Agh!

Turns out, it depends. This is a hyperbolic headline for whatâ€™s actually a pretty solid piece of reporting. The author, a health and science writer, reports on a study that compared the vehicles of teenaged drivers who die in car crashes (I know, itâ€™s horrible even to type that phrase) with the cars of older drivers in fatal crashes.

They found that almost half of the teen drivers in these fatal crashes were driving a car 11 years old or older, and that the teen victims were almost twice as likely as the older drivers to be in an older car.

BUT hereâ€™s what got buried: â€œWhat the researchers don’t know is what percentage of teens drive older vehicles. So they can’t say that the data prove that older vehicles are increasing the risk of death in teenagers (irate emphasis mine).â€

If, Â say, 80% of ALL teen drivers are driving cars 11 or more years old, and only 48% of fatal teen crashes occurred in those older cars, that would mean the older cars are SAFER than newer ones. We just donâ€™t know from this study. But that, of course, doesnâ€™t make a good headline. It doesnâ€™t make our guts churn with worry and guilt.

Like Lenore, Iâ€™m all for safety. Helmets on bikes, seatbelts in cars. Airbags save lives, too, and probably none of us should be riding in cars without them, unless weâ€™re sitting in the back of a vintage Caddy for the 4th of July parade.

Luckily, the US has required airbags in all cars sold in the US since 1998. Your choices are ample, hereâ€™s a link to recommendations for various price points. As parents of new drivers, we can set reasonable limits on the where, when, and with whom of the driving equation, too.

This is all part of the common sense parenting of kids who are getting ready to fledge, and we parents of teens need all the common sense we can muster. What we can do without is yet another ginned-up item for worry, so read past the crazy-making headline and buy your kid that old Volvo, already! – Kari Oakes 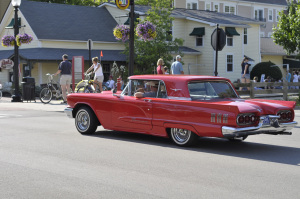 What does a study of young drivers & old cars really tell us?

110 Responses to Should Teens Not Drive Older Cars?