All niffsahrfz
animals play. It is how they learn. Young gazelles chase each other in what looks like a game of tag, even though by doing so, they are putting themselves at real risk: First, they are using up calories that they will have to replenish. Second, they are running around where predators can see them. Why would Mother Nature program them to do such a dangerous activity? Why is the need for play an INSTINCT?

Because it must be even MORE valuable to the continuation of the species than simply staying “safe.” What gazelles — and ants, and bats, and kids — learn through play is crucial to their survival and well-being.

And yet. And yet. Play keeps disappearing from kids’ lives. This can be traced to the twin fears stalking parents today: 1 – That their children will be kidnapped the second they go outside. And 2 – That they will not get into Harvard.

We talk about the first fear a lot here. (And it’s new corollary: that the kids will be scooped up by the cops.) But today’s post is about the second fear: The need, reinforced by school policies, to “prove” that kids are learning lots, and learning fast. And since you can’t really test whether a kid is learning creativity, problem-solving, or self-control, what’s tested for instead are academic achievements. But these are the ones that most kids could get a few years later, without this “lag” hurting them at all. Remember: Kids in Finland start school at 7Â . yet they end up among the most literate in the world. So you don’t have to shove letters into a kid at a desk at age 4.

Explaining this eloquently is Nancy Carlsson-Paige, described by the Washington Post as “an early childhood development expert who has been at the forefront of the debate on how best to educate â€” and not educate â€” the youngest students.” She also seems to be the mom of Matt Damon.Â She gave this speech upon receiving the Deborah Meier award from the National Center for Fair and Open Testing.

…We have decades of research in child development and neuroscience that tell us that young children learn actively â€” they have to move, use their senses, get their hands on things, interact with other kids and teachers, create, invent. But in this twisted time, young children starting public pre-K at the age of 4 are expected to learn through â€œrigorous instruction.â€

And never in my wildest dreams could I have imagined that we would have to defend childrenâ€™s right to play.

Play is the primary engine of human growth; itâ€™s universal â€“ as much as walking and talking. Play is the way children build ideas and how they make sense of their experience and feel safe. Just look at all the math concepts at work in the intricate buildings of kindergartners. Or watch a 4-year-old put on a cape and pretend to be a superhero after witnessing some scary event.

But play is disappearing from classrooms. Even though we know play is learning for young kids, we are seeing it shoved aside to make room for academic instruction and â€œrigor.â€

I could not have foreseen in my wildest dreams that we would have to fight for classrooms for young kids that are developmentally appropriate. Instead of active, hands-on learning, children now sit in chairs for far too much time getting drilled on letters and numbers. Stress levels are up among young kids. Parents and teachers tell me: children worry that they donâ€™t know the right answers; they have nightmares, they pull out their eyelashes, they cry because they donâ€™t want to go to school. Some people call this child abuse and I canâ€™t disagree.

Read the rest here, including the part where she describes how this deep insistence on measurable learning is hurting the poorest kids the most. Kids need free time to develop interests, curiosity, compassion… You get the idea. Free-Range Kids believes in more free time for kids. Period. – L Â 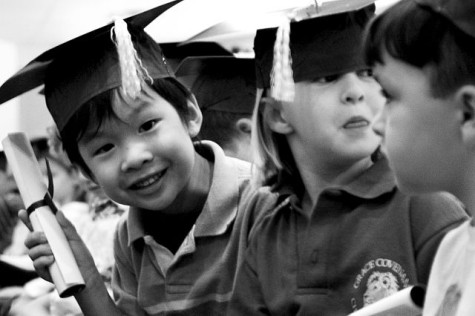 Look! I learned how not to play!

33 Responses to Sitting Still in Pre-K