Dear Free-Range Kids: A friend of mine is looking for a pool where she can take 3 kids (age 4mos, 3yo, 5.5yo). The 5yo has just gotten confident in jumping from the edge, swimming to the side, hauling herself out, and doing it all over again (the swim lessons are working). The infant can’t even sit up by herself. The middle child is of the kamikaze sort.Well, with the increasing skills, the crew is outgrowing the local wading pools (depth of 1 1/2 feet, size of a NY kitchen).She’s polling FB friends: Â “Where can I take all 3 kids–all the public pools have a 1:1 ratio requirement for children under age 7. Some have a rule you have to be within 2 feet of the child at all times in the water. “Meaning: To get all three kids to a pool (a superhuman task in itself), she has to recruit TWO more adults to join her….only they can’t be mama friends with their own kids, or the ratio is still off.At least one pool requires Mom to be IN A SWIMSUIT before the child even puts his toes in.All of these pools have lifeguards.I’m really, REALLY big on water safety, and was one of the “pro” people on those two spams that went around, the one about how drowning doesn’t look like drowning, and the other about the delayed dry drowning…. but geez.Â  How are kids supposed to learn to swim if you don’t let them swim? (and nevermind those 10-min hourly Adult Swim laps for mama while the kids all sit around the edge). I can see a lifeguard being overwhelmed if you brought in a whole school class, but — what’s a family with 4, 3 or even just TWO kids supposed to do?Â How can you be two feet from both the 2yo in the shallow end or the wading pool, and the 5yo jumping off the side?Couldn’t they just up the entrance fees and add a couple of lifeguards so families could enjoy summer? This is all going on in Los Angeles and Glendale, Calif, and Altadena. – Miffed Mom

Miffed Mom — My guess is that no amount of lifeguards seems safe enough once you — or your insurance company — believe that every child needs a bodyguard. – L 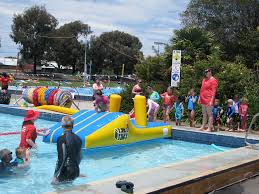 On the Sex Offender List at 20 for Sex with an 18 Year Old…Or So He Thought
Walking to School, Non U.S.-edition