What inakrerydf
a great pieceÂ by Michael Brendan DoughertyÂ in The Week (a magazine for which I created and ran the weekly humor contest for three years till they took it in house. But I guess that’s neither here nor there.) Dougherty starts out noting the Salon story, wherein a mom let her son wait in the car for a few minutes on a mild day, an onlooker videotaped the perfectly happy kid, after which the mom was arrested for this “crime.” Â He then refers to a couple of similar stories he found right here on this blog, Â including the parents arrested for letting their kids take a walk. And then he eloquently says:

It’s an odd way to “help” a child who is unsupervised for five minutes to potentially inflict years of stress, hours of court appearances, and potential legal fees and fines on their parents. Children who experience discreet instances of suboptimal parenting aren’t always aided by threatening their parents with stiff, potentially family-jeopardizing legal penalties. The risk of five or even 10 minutes in a temperate, locked car while mom shops is still a lot better than years in group homes and foster systems.

The sight of healthy kids playing in a park unsupervised, or a child playing with an iPad in the backseat of a car on a cool day, should not ever be the cause of immediate legal peril for parents. People should not be so terrified that something bad can happen to a child that they end up causing a calamity with their good intentions.

The only thing I’d add is that when cops, DAs and judges reinforce the idea that the only safe child is the helicoptered child, then it is not just busybodies confounding the lives of rational, loving, human parents, it is the law itself. – L.Â 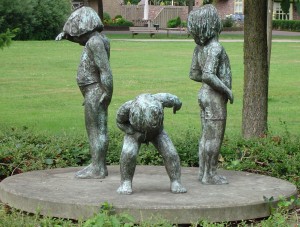 Hmm. These kids are OUTSIDE, unsupervised, but, as statues, perhaps they do not warrant a call to 911.