From today’s New York Times’ obit about Al Plastino, who drew scores of Superman comic books from the 1940s through the 1960s, as well as the Superman and Batman newspaper comic strips:

Alfred John Plastino was born on Dec. 15, 1921, in Manhattan and grew up in the Bronx. His mother died when he was 6. His father, who made hats and sold them from a store on Fifth Avenue, often dropped his son off at the Metropolitan Museum of Art, where young Al would sketch Monets and Michaelangelos.

In other words, Al’s dad left him alone, as a child, in a big museum in a big city.Â Didn’t he realize, “Anything could happen!”?

And it did. His son grew up to be an artist.

Some day when you drop your own kids off at a park or a palace or a place they happen to love, remember: This is not negligence.Â This is allowing a child some precious Free-Range time while you “lean in” to something other than them for a little while. Yes, “Anything could happen.” 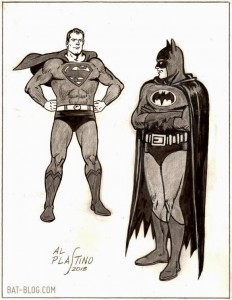 Holy Free-Range Kids, Clark! The guy who drew us spent time ALONE as a BOY at the Metropolitan Museum of Art!