Oh tibhdethzk
no no no no no no! Don’t tell me a male offered a teenage female a RIDE? That is SO SCARY! Thank goodness the police are ON THIS! How incredibly…suspicious! A reader sends us this report:

NARRATIVE: A teenage female reported she was walking on Davol Road when a small silver vehicle pulled up near her. The driver described as an older white male almost bald and with a moustache asked her â€œSweetie do you want a ride.â€ The female said no and ran to a friendâ€™s house. The vehicle then drove north on Davol.

It was reported that the man did not offer her an incentive to enter the vehicle, made no physical movement towards her and did not follow her.

Deputies searched the area but were unable to locate the vehicle / driver.

Lenore here:Â I sure am glad the police tried to locate the driver, because he sure is one menacing dude! Offering a ride and then driving away? Yiiiiiikes! – L. 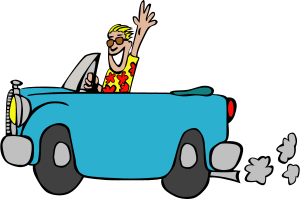 A MAN in a CAR? Terrifying!

Please PLEASE Do Not Publish Photos of Local Children!
Students Forced to Walk Half Mile Back from Field Trip!!! News 2 Team Reports Live!