Readers â€” One of the things I try to explain in my talks, bfbkektfai
bookÂ and blog is that some present-day parenting practices (and laws) that just seem â€œwiseâ€ now will be considered downright detrimental in the future, or are considered weird NOW in other places. For instance:

Dear Free-Range Kids: I canâ€™t thank you enough! When I thought everyone around me is so fearfully overprotecting their kids, I was so relieved to find your homepage. My story in a nutshell:

We moved 4 years ago from Switzerland to Canada. Both my kids, now 4 and 5, were born in Switzerland but raised here in a very small community in Hamilton, ON Canada. But raised by me â€“ an average Swiss mum who had no idea about helicopter parenting.

At age 3, I allowed my older son to go around the corner with his push-bike. No, he was not allowed to cross the street yet. But yes, I did not see him any moreâ€¦ for at least 1 or 2 minutes until I caught up (which is very normal in Switzerlandâ€¦ where also playgrounds are built that way, that parents not always see their kids). But various times people brought him back to meâ€¦ and I just did not understand whatâ€™s going on.

My biggest struggle I have though, is with their school.Â The kids can not touch each other! I get feedback from the teacher that the â€œstudentsâ€ are not allowed to hug their friends. They could fall while hugging and hurt themselves! My approach to turn it into a High 5 did also not work. Too harsh. Oh wellâ€¦

Recess is often skipped. It is too cold. The kids could get cold. They could slip, because it rained in the morning. Their feet could get wet. Sooo many reasons. And yet all my arguments, that we can stand a little cold feet, get changed when the cloth are soaked, I would come in to help cleaning the carpetâ€¦ if the shoes get dirty and ruin the carpetâ€¦ nothing helped.

Thanks to the media, parents world wide get probably more anxious. But what I think is very interesting: the reaction from official institutions. While they just ripped away all 20 parking lots at my old school in Switzerland, because they were tired watching how kids get driven to school, they build new ones here. And while in Switzerland they do a â€œtestâ€ with the kids, if they know all the rules to walk themselves to school, it is simply forbidden to let the kids walk to [my] school in Canada. How silly. Being locked out at recessâ€¦. happening still in Switzerland (with the argument that in bad weather various kids would just sneak inside instead of playing outside) or locked in (like hereâ€¦ because of bad weather). Interesting, donâ€™t you think so?

But I will keep my kids â€œon the long leash.â€ I love seeing them independent, free, wild, sometimes inconsiderate or immature. But I also think they should be able to make mistakes. And learn to live with it.Â

Not only did I love Lisaâ€™s letter, I really appreciate her saying that sometimes her kids â€” all kids â€” may be â€œinconsiderate or immature.â€ (Especially at age 3 or 4!) One thing Free-Range Kids does not guarantee is absolutely perfect and charming children. Yes, we try to give them independence and responsibility. But no, we don’t have a â€œperfect kidâ€ formula. (Yet.) â€“ L. 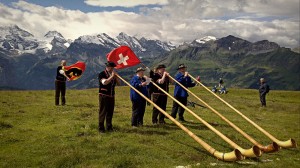 Spy on Your Kids Or They Will Be in Danger
Is This News? A Baby Almost Hurt Himself