This story Â is upsetting, but also reassuring. I put it here to remind us all that just because some authorities are too quick to investigate fine parents — and those are the stories I often highlight, because this nnkhrbbrsr
must change — plenty of cops and child protective workers can recognize hysteria when they see it.

The thing I worry about more than anything are the “good Samaritans” who see a child alone and suddenly assume that SOMETHING has to be done. Call somebody! NOW!

I was in a small thrift store a couple months ago with my 6-year-old and my husband.Â  When I say it was small, I mean you could see literally everything and everyone in the store no matter where you were.

We go to this thrift store quite frequently and, as always, I was on one end of the store looking at things, and my husband was about 20 feet away, looking at other things.Â  My son looked through the toys, then went back and forth between my husband and me every few minutes, asking if it was time to leave.Â  (He hadn’t found anything good, so as far as he was concerned, there was no reason to still be there!)

We were there for a total of less than 15 minutes.Â  My husband, son, and I stayed in the store together the entire time.Â  I noticed a few minutes after we got there that a woman and her little boy had come in.Â  She immediately strapped him into the little baby seat in a shopping cart (he was too big for it in my opinion, but I minded my own business).Â  My son was still going back and forth between my husband and me, talking nonstop to everybody he saw (which he always does, and I only make him stop if I’m afraid he’s bothering somebody).

He stopped to talk to this woman’s son about Legos.Â  The boy looked to be about my son’s age, and I overheard their conversation, smiling to myself because he’d found a little friend.

I thought it was a little odd.Â  She fired these questions off rapidly like it was an investigation.Â  My husband overheard this, too, but we didn’t intervene.

My son came back over to me to ask again if it was time to go, and it was.Â  We all went up front to pay, as the store was closing anyway.

The woman then left the store with her son, put him in her car, and came back in to confront me in front of everybody right at the front entrance near the register.

She pointed at me and said, “You need to take better care of your child.Â  He was way too willing to tell me things about himself.Â  I know his name, where he lives, where he goes to school, and his birthday.Â  You really shouldn’t allow your son to be unsupervised in a store like this.Â  I could’ve walked right out of here with him and you would’ve never known it because you weren’t paying any attention to him or watching him at all.”

My husband, normally pretty quiet and reserved, spoke up and said “Like HELL you would’ve walked out of here with him.”

The woman demanded an explanation from me as to why I allowed my “baby” to be unsupervised in the store.Â  I told her I would not give her any explanation, and that I didn’t owe her anything.

The woman said she was a “ranger” (not sure what that means) and that if I were in her “jurisdiction” she would arrest me and have me put in jail right on the spot for my neglectful behavior.

I told her that if that was her take on things, she’d be arresting people in that store — and many others — every single day.

I guess I wasn’t apologetic enough for her taste. She then got her cell phone out, right then and there, and called 911 to report an abandoned child.

She walked out of the store, and my husband, son, and I followed her.

She took a picture of my license plate while she was on hold with 911 and told me, “You’re going to jail tonight, sweetheart.Â  You better hope somebody can come get your son ’cause you’re spending the night in jail.”

I pointed out that while she was inside launching her self-righteous tirade, she’d left her OWN son in the car alone, in the parking lot.Â  She laughed and said “There’s nothing wrong with that.”

My heart was pounding.Â  I couldn’t believe this was actually happening.

The police showed up about five minutes later.

The officer took my husband’s statements, my statement, and this wacko’s statement.Â  My son was crying, scared, and holding on to me for dear life.

Then the woman told the officer to go check with the store employees. “Yeah, they’ll tell you.Â  This woman left her son all alone in that store almost the entire time they were open today.”

I figured this woman would hang around to see how things turned out, but she left after that, giving me a smirk first and saying “Heh.Â  Enjoy your night in jail, honey!”

I had no idea what was going on.Â  We’d just stopped in to browse before going to dinner, like we’d done a hundred times before.

The officer came back out after talking to the cashier in the store and told us we were free to leave, and that we’d done nothing wrong.Â  He said “Hey, I have kids, too.Â  I know how it is.Â  Have a good day.”

I was so relieved that I started crying right there in the parking lot.Â  Know why?Â  Because of stories like the one Lenore posted.Â  I know how these things can turn out, and they can ruin your life, and your children’s lives.Â  All because of what?Â  We didn’t bubble-wrap our kids and never let them out of their sight until they’re grown?

I would never leave either of my children in a dangerous place, or neglect them.Â  At the same time, though, I want them to experience freedom and learn some independence when it’s appropriate and possible.Â  There’s always that fear, though, that one of these so-called do-gooders will show up and smash your entire world to pieces, all in the name of “safety.”

It’s hell sometimes, trying to raise a Free-Range kid in this country.Â  My thoughts and prayers go out to all Free-Range parents to make the effort to do it anyway.

My thoughts and prayers go out, too. But lately I’ve been thinking we really need some legal leverage, too. That’s why I’d really like folks to chime in with ways we can get the “Free-Range Kids and Parents’ Bill of Rights” into action, stating that kids have the right to some unsupervised time and we have the right to give it to them, without being arrested. Really, with that bill Â in place, the idea that your kid was unsupervised — even if it were true — would not matter, because kids would have the right to not be Velcroed to their parents 24/7.

And in another post soon, I will go into why I think this new level of supervision that our society is demanding, is actually age-old superstition. – L 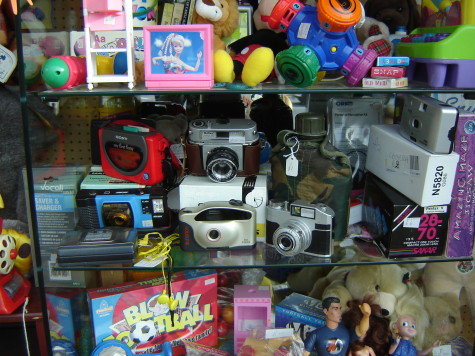 Are kids as easy to pick up at the thrift shop as a one-armed Barbie?

Cool Idea: Free-Range Kid Bracelets
Boy, 11, Plays Basketball in Own Yard as He Awaits Delayed Parents. Cops Take Him & Brother Away for a Month