An unhappy commenter gives us this link to the picture of a missing 17 year old Â — http://www.missingkids.com/poster/NCMC/1244645 sffkdkisti
Â — and writes, in response to our urging the police not to arrest parents who let their kids play outside unsupervised:

tell the parents of this child. And the thousands more missing ” ITS OK TO GO ALONE TO STORE,PARK,FRIENDS, , because of your opinion, my daughter and I are arguing over not letting her kids walk alone to school, etc.Â  Free range is for chickens,,Â  not kids. Look at the missing ,all teen age girls gone, missing, trafficking is on rise, truckers are being asked to watch for these girls. Its an epidemic. When you give advice to people you must be responsible with what you say or tell them. 30 + years ago it was OK to let your kids run free, there’s even kids missingÂ  from 1950’s .Â  I can’t believe you’re telling mom’s an dads let your kids run free. Have you ever voluntered for a family who’s looking for a lost one?Â  I suggest you think about what your spouting off about ,undermining my authority as a parent,grandparent to safety of my family.Â  Be ready to be sued if GOD forbid something happens.Â  I will be sharing your link withÂ missing friends.

UPDATE: Here’s a note I just got — fascinating:

I saw your blog post about the woman so terrified of kidnapping that she won’t let her almost adult daughter (17) “run free.” She admonishes you about giving advice to parents using an appeal to emotion. Tell that to the parents of a missing child. It’s an epidemic.

90% of all teenagers that go missing, are runaways and troubled teens.

And the only regret that’s ever been expressed to me by these parents is that they wished they had gotten a better grip on their drug habits. I wish this lady would get a grip on her overblown fear. – CathyÂ 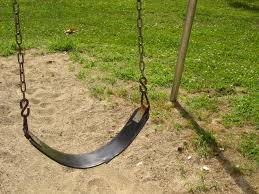 Isn’t it strange how this generation automatically associates an empty swing with a missing child who’s murdered — instead of a child who’s missing because she’s not allowed to go to the park?

The YMCA Song…and Dance, When It Comes to Background Checks and Liability
This Week’s Consumer Product Safety Recall is…YARN

81 Responses to FASCINATING UPDATE: “Tell the Parents of a MISSING CHILD that You Believe In Letting Kids Walk to School!”