Lenore Skenazy, a New York City mother of two, earned the sobriquet â€œAmericaâ€™s Worst Momâ€ after reporting in a newspaper column that she had allowed her younger son, then 9, to ride the subway alone.

The damning criticism she endured, including a threat of arrest for child endangerment, intensified her desire to encourage anxious parents to give their children the freedom they need to develop the self-confidence and resilience to cope effectively with lifeâ€™s many challenges.

One result was the publication in 2009 of her book â€œFree Range Kids: How to Raise Safe, Self-Reliant Children (Without Going Nuts With Worry).â€ A second result is the Free Range Kids Project and a 13-part series, starting Thursday on Discovery Life Channel, called â€œWorldâ€™s Worst Mom.â€ In it, Ms. Skenazy intervenes to rescue bubble-wrapped kids from their overprotective parents by guiding the children safely through a sequence of once-forbidden activities and showing their anxious parents how well the children perform and how proud they are of what they accomplished.

The term â€œhelicopter parentsâ€ applies to far more than those who hover relentlessly over their childrenâ€™s academic and musical development. As depicted in the first episode of the series, it applies to 10-year-old Samâ€™s very loving mother who wouldnâ€™t let him ride a bike (â€œsheâ€™s afraid Iâ€™ll fall and get hurtâ€), cut up his own meat (â€œMom thinks Iâ€™ll cut my fingers offâ€), or play â€œrough sportsâ€ like skating. The plea from a stressed-out, thwarted Sam: â€œI just want to do things by myself.â€

In an interview, Ms. Skenazy said, â€œHaving been brainwashed by all the stories we hear, thereâ€™s a prevailing fear that any time youâ€™re not directly supervising your child, youâ€™re putting the child in danger.â€ The widespread publicity now given to crimes has created an exaggerated fear of the dangers children face if left to navigate and play on their own.

Yet, according to Peter Gray, — 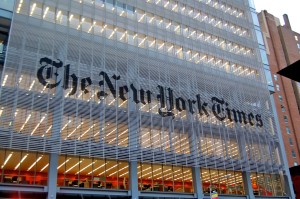 The Gray Lady and The Free-Range Mom together at last!

15 Responses to THANK YOU, JANE BRODY AND THE NEW YORK TIMES