October 21, 2016
In yhhhnsfhbi
Silicon Valley, a dad named Mike Lanza wanted to create for his three sons the same kind of Free-Range childhood he’d enjoyed as a kid back in Pittsburgh in the ’70s: Time with buddies, having adventures, riding bikes and goofing around.
.
Since this is the 21st century and childhood is so much more supervised and organized, he decided to turn his home into a bastion of freedom and community. So he did something I just love: in a neighborhood of where the average home is $2 million, he placed a picnic table on his front lawn. He and his family ate there often, inspiring exactly the kind of give-and-take you’d expect: People meeting, talking, getting to know each other.
.
This gargantuan New York Times article by Melanie Thernstrom describes the “Playborhood” that Lanza developed — a sort of playground that attracts a lot of local kids, who play in what sounds like a rough approximation of the way they’d play if they were in the woods:
.

He consciously transformed his family’s house into a kid hangout, spreading the word that local children were welcome to play in the yard anytime, even when the family wasn’t home. Discontented with the expensive, highly structured summer camps typical of the area, Mike started one of his own: Camp Yale, named after his street, where the kids make their own games and get to roam the neighborhood.
.
“Think about your own 10 best memories of childhood, and chances are most of them involve free play outdoors,” Mike is fond of saying. “How many of them took place with a grown-up around?”

.
I ask that very question at my own lectures sometimes, and everyone laughs. Almost all of today’s parents remember their childhood freedom intensely, longingly, and when pressed, they usually say they wished they could give it to their own kids but don’t know how.
.
Lanza’s insight was to realize that if he made a place where kids could be pretty sure they’d usually find other kids, children would naturally come outside and start playing. He and I both agree with psychologist  Peter Gray that when kids are organizing their own games — making the teams, deciding the rules, inventing some new challenge — they are learning far different life skills than they learn in organized activities. Skills like communication, creativity, and compromise, often along with some basic risk-taking.
.
Gray visited Lanza’s home earlier this year and even trailed the oldest Lanza boy, Marco, age 11. On his Psychology Today blog, Freedom to Learn, Gray writes:
.

Mike lent me a bicycle so I could follow Marco and his friend on this trip, which I did, from a distance, with the boys’ kind permission.  I saw how gracefully they performed scooter tricks in driveways and on steps as they made their way to the park; I watched as they stopped at a bicycle shop on the way, where Marco, on his own, got an inner tube that he needed for some project he was working on at home; and I also saw how careful the boys were when they crossed the busy multilane street they had to cross to get to the park.  At the park, Marco and his friend seemed to be the only kids their age or younger who were not attended by an adult. I felt a vicarious thrill as I watched them make their scooters dive and leap at the park.
.
Mike believes that Marco would not be the physically and socially competent boy he now is if it were not for his (Mike’s) efforts in creating the playborhood.  In a recent essay (here) he presents evidence that social skills did not come easily or naturally to Marco.  It was only through regular, daily experience at play with others that he learned to be socially competent and confident.

.
Free play is not a frivolous extracurricular that can be dropped from a child’s busy schedule. It may actually be the key to resilience and ingenuity — not to mention joy. So I am extremely glad Lanza came up with a way (and a book) to give it back to this generation. Other people in other towns are encouraged to try something similar. So I am on board with him — except for the fact that he also lets kids climb on the roof of his home. A male friend I discussed this with told me, “Roofs call out to boys the way mountains do.”
.
A female friend and I agreed we’d never want our kids on the roof. Period.
.
But let’s not lose track of the bigger picture, which is that the Playborhood inspired ten trillion words in The Times because the once heartwarming sight of kids playing on their own has become so unusual.
.
As a society, we have pretty much declared ALL unsupervised time unsafe. Parents get harassed and even arrested for letting their kids walk to school, or play outside, thanks to a mindset that equates freedom with danger. That means many kids don’t get ANY unstructured, unsupervised time. Without it, they are losing out on the very confidence and competence that Marco seems to enjoy.
.
The Free-Range idea is not to court danger. We are not negligent. We are not daredevils. We are allowed to set whatever limits make sense to us. But we are also mindful of the fact that a childhood drained of absolutely all risk, even the risk of walking to the bus stop, is a new and dangerous (!) idea. We believe we can actually make our kids too safe to succeed.
.
Free time was the great gift our culture used to give children. The Free-Range goal is to give kids back at least a fraction of the healthy, happy, horizon-expanding, creativity-boosting, entrepreneur-growing, resilience-building freedom that made America so successful.
.
And its children so happy. – L. 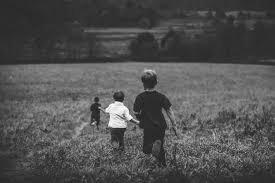 Is there a way to get kids back outside, making their own fun, unsupervised, unstructured, untrophied?

We Weren’t Always Obsessed with Child Abduction
More About Playborhood and Risk, From Tim Gill