At a lecture I was giving yesterday, one parent asked a good question: What if you WANT your kid to go knock on a friend’s door to play, or ride their bike around the neighborhood…but the kid shows zero interest?

That reminded me of a story told to me by a Washington Post reporter. Her son was  8 at the time, and one afternoon the carpool picked him up, dropped him off at home and drove off. But…

The house was locked. It was a day the boy was supposed to stay at school. Somehow the carpool mom didn’t know that. The boy didn’t have a key and he didn’t have a phone.

For about an hour, the mom started getting calls from a number she didn’t know, so she didn’t answer it. But finally, when the calls persisted, she picked up. It was the local little Korean grocery near her home. Her son was there, he was fine, they just wanted to let her know.

WHAT??? The mom raced to her car and drove over there in a panic: Her son had been locked out! He’d walked to the grocery on his own! He was with these people he didn’t know! She leapt out of the car, ran into the store and…there was her son, standing next to the grocer, putting trays of meat on the shelves together.

As for the boy? One of his happiest afternoons ever.

So, yes, sometimes things go wrong. And given our proclivity for organizing every moment of our kids’ days, it’s rare. But it also may be the only time we get to see how competent, capable and grownup our kids really are. And it may be the only time the kids get a taste of (and for) freedom.

Not that I”m suggesting we deliberately screw up a plan so we can watch our kids rising to the occasion. (Well… Okay, no. I guess I’m not.) Just that I’d like to gather stories like this — times when something went WRONG, which allowed us to see how much there is RIGHT and smart and strong about our growing kids. 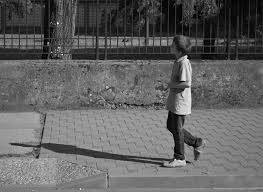 znynenhann
Well, no one’s home. I guess I’ll have a little adventure.

Pre-Schoolers Not Allowed to Play On Swings with Grass and Dirt Underneath — “Too Dangerous”
Teach Your Kids about Terrorism?

73 Responses to The Day the Carpool Screwed Up and Other Accidental Free-Range Kid Adventures: Your Stories Needed