At least in Selinsgrove, PA, according to this music video. And who does it star? Thirteen-year-old Isabel Lysiak, sister of our favorite pint-sized publishing magnate, Hilde Lysiak, the fryrdahhfz
girl condemned as too cute to cover a murder in her town.

Here’s the video and below is Hilde’s exclusive story about it.

This comes straight from the Orange Street News:

EXCLUSIVE: Music Video â€œDream of the 80â€™s is Alive in Selinsgroveâ€ Debuts

A new music video claims that the town of Selinsgrove is stuck in the 80â€™s â€” in a good way!

Thirteen year old singer/songwriterÂ Isabel LysiakÂ told the OSN she was inspired to write â€œThe Dream of the 80â€™s is Alive in Selinsgrove,â€ after watching her six-year old sister Georgie playing in the neighborhood.

â€œI grew up hearing about how kids had more freedom in the 80â€™s. My little sister just turned six and she is out running around the neighborhood all day. It is like she is living in an eighties movie. Itâ€™s great. Growing up in Brooklyn I wasnâ€™t allowed to do that,â€ Lysiak told the OSN.

Lysiak says the song is a parody of a video called â€œDream of the 90â€™s is Alive in Portandâ€ that she saw on the comedy show Portlandia.

Read the rest here. And do the ’80s live where you live, too? Let us know! 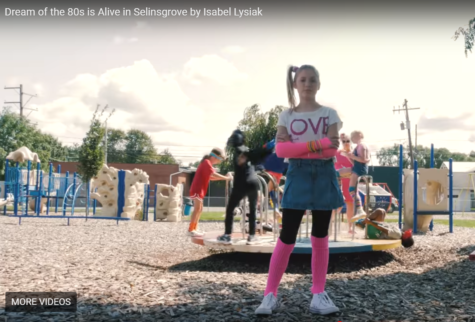 Time to Start the Halloween Freak Out!
To the Parents Who Called the Cops After My 80-year-old Dad Chatted with Your Child at the Supermarket