Maybe the answer to, “How can we get kids back to walking to school?” is, “Um…suggest it?”

That’s rtyenkftfs
what St. Raphael Catholic School in Toronto did. The student-run Heath Action Team pushed for kids at the K-8 school to start walking.Â They held a why-it’s-good-to-walk assembly, they organized official walk-to-school days on the last Friday of every month, and they partnered with Safe Routes to Schools, which did a study of the reasons parents don’t let their kids walk. And? Here’s what Metronews.caÂ reporter May Warren found:

The 12-year-old walks â€œto and from school every day rain or shineâ€ as a student leader of a program aimed at getting other kids to get to do the same.

Since the program started in September, the number of students walking to or from school has already increased by nine per cent â€” up from 24 per cent in May 2016 to 33 per cent in October, according to a recent school survey.

â€œWhen we tabulated the numbers it was incredible,â€ teacher Cristian Fazzini said of the initiative, which he said could act as a model for other schools.

But the phys-ed teacher was not exactly shocked. Even before the numbers were counted, heâ€™d noticed a dip in the number of cars around the school and kids taking the bus.

Compare that to this Streetsblog videoÂ of morning drop-off at a school in North Carolina. Granted there, as in Toronto, the Number 1 reason parents drive is that the school is too far away:

But it seems obvious that if a school makes walking a priority and the students talk it up, if nothing else the parents could start dropping their kids off a few blocks away. (Unless they really like spending 20 minutes a day inching forward.)

Bottom line: Schools can encourage kids to encourage other kids to walk to school. It doesn’t have to be more complicated than that. 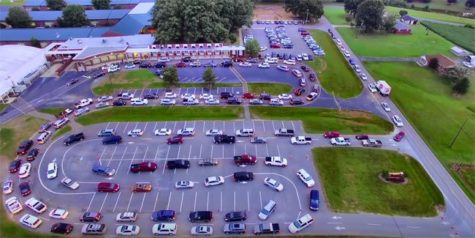 Drop-off at an American school. It’s only 20 minutes a day! (Well, times two…)

THE TOP 10 WORST FREE-RANGE MOMENTS OF 2016 (Well…the Top 11, actually.)
“I Can’t Believe You Took Your Eyes Off Your Kid at the Mall. That is Bad Parenting!”

33 Responses to The “Duh!” Way to Get Kids Walking to School