The account below seems to capture the shocking and chaotic scene bhrensehfe
at the Cincinnati Zoo, where a toddler wiggled his way into the gorilla exhibit and had to be saved, unfortunately by zookeepers shooting Harambe, the 400-pound gorilla holding onto him.Â The gorilla died. The boy has been treated and released from the hospital.

The public has, naturally, weighed in on this, as if any of us in our armchairs have any insights as to what was happening or should have happened. Many people are livid that the zookeepers killed the animal, but just as many seem to be blaming the human mom. Because of course, bad things only happen to the children of bad parents, and parents who are distracted are freakishly awful. And so this outrageous meme is going around: 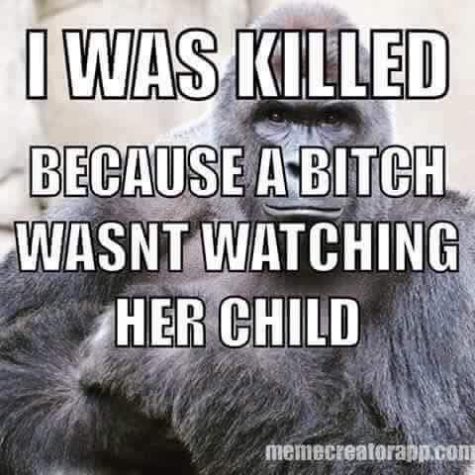 Turning an unpredictable tragedy into a mom-shaming meme.

Here, then, is what appears to be a firsthand account of the horrible afternoon (lifted from Facebook):

My family and I decided to go to the zoo yesterday after visiting my neice at Cincinnati Childrens hospital. For those of you that have already heard, there was a terrible accident there yesterday. And since every news media has covered this story, I don’t feel bad telling our side. This was an accident! ! A terrible accident, but just that! My husband’s voice is the voice talking to the child in one of the videos. I was taking a pic of the female gorilla, when my eldest son yells, “what is he doing? ” I looked down, and to my surprise, there was a small child that had apparently, literally “flopped” over the railing, where there was then about 3 feet of ground that the child quickly crawled through! ! I assumed the woman next to me was the mother, getting ready to grab him until she says, “Whose kid is this? ” None of us actually thought he’d go over the nearly 15 foot drop, but he was crawling so fast through the bushes before myself or husband could grab him, he went over! The crowed got a little frantic and the mother was calling for her son. Actually, just prior to him going over, but she couldn’t see him crawling through the bushes! She said “He was right here! I took a pic and his hand was in my back pocket and then gone!” As she could find him nowhere, she lookes to my husband (already over the railing talking to the child) and asks, “Sir, is he wearing green shorts? ” My husband reluctantly had to tell her yes, when she then nearly had a break down! They are both wanting to go over into the 15 foot drop, when I forbade my husband to do so, and attempted to calm the mother by calling 911 and assure her help was on the way. Neither my husband or the mother would have made that jump without breaking something! I wasn’t leaving with my boys, because I didn’t trust my husband not to jump in and the gorilla did just seem to be protective of the child. It wasn’t until the gorilla became agitated because of the nosey, dramatic, helpless crowd; that the gorilla violently ran with the child! And it was very violent; although I think the gorilla was still trying to protect, we’re taking a 400 lb gorilla throwing a 40 lb toddler around! It was horrific! The zoo responded very quickly, clearing the area and attempting to save both the child and the gorilla! The right choice was made. Thank God the child survived with non-life threatening, but serious injuries! This was an open exhibit! Which means the only thing separating you from the gorillas, is a 15 ish foot drop and a moat and some bushes! ! This mother was not negligent and the zoo did an awesome job handling the situation! Especially since that had never happened before! ! Thankful for the zoo and their attempts and my thoughts and prayers goes out to this boy, his mother and his family.

The local TV station WLWT5 explained that the gorilla was not simply tranquilized, “because when the animal is agitated, [Zoo director Thane] Maynard said, the tranquilizer may not take effect right away. This was the first time Cincinnati Zoo officials have killed an animal in this manner, Maynard said.Â The zoo also said this is the first security breach at Gorilla World since it opened in 1978.”

When something terrible does not happen, ever, I’d say we are allowed to assume it won’t happen. Sort of like if the manhole in front of my apartment suddenly blew up, I don’t think I’d blame the mom of any kid who happened to be walking by it at the time, even if the mom wasn’t right there.

When we are faced with sudden sadness, we have a few choices. We can sigh. We can pray. We can donate — for instance, to an animal sanctuary.We can commit ourselves to trying to make the world a better place, if only to feel less despair. Or we can force ourselves to understand that the incomprehensible — especially sudden death — either has a bigger meaning (it’s part of God’s plan) or it doesn’t (fate is fickle).

What is easier than all of these is to sink into the sewer of self-righteousness and pretend that if only someone had been doing what we believe WE would have done in that unpredictable situation, everything would be peachy. That way we get to feel smug AND angry — a heady combination, and the perfect kindling for a witch burning.

Let’s not burn any witches as we mourn the gorilla. – L.

“Hamster,” “Ox,” “Otter,” and Other Natural-World Words Removed from Children’s Dictionary
“I Was Ambushed by Crazies For Letting My Son Wait in the Car”

422 Responses to The Gorilla, The Boy, The Mom and the Shamers