September 14, 2015
.
Safety ayskysbffe
hysteria is everywhere, but nowhere more obvious than in “must read” warnings to parents, like the ones discussed below. A mom named Alisha emailed to say, “As a former paramedic I’m all for safety, but I am frustrated on a daily basis with other people’s perception of what is dangerous.”
.
Me too. That’s why I love her letter. By the way, the clothing hampers that the article talks about are made of fabric and wire.

Dear Free-Range Kids: So in this month’s Parents magazine there is an article titled “10 Hidden Hazards In Your House.” In big red bold letters of course. Here are some of the things it says.
.
“Some of the most serious hazards aren’t outdoors, they’re hiding in plain sight in even the most safety minded households. Learn what is risky and how to avoid an accident.” Item #1: “Clothing Hampers…. As an impromptu tunnel or fort these fit the bill, but they should be off limits to kids, because they’ve caused severe eye injuries.”
.
It goes on to quote a surgeon who says kids have required emergency surgery after kids eyes were cut open, his exact words, when a wire came loose from the fabric. It makes it sound like this happens daily to thousands of kids and instead of just a painful poke to the eye, painful but not life altering, that kids’ eyes are being ripped from the sockets requiring emergency specialty surgery!
.
Talk about worst-first thinking. I guess I will have to tell my daughter one of her favorite toys is now off limits, since these recommendations are for kids 14 and under.
.
The list goes on with #5: Hard candy. It says that hard candy is the thing that kids under 14 choke on the most frequently. It goes on to say the most common scenario is toddlers running with candy in their mouth and starting to choke — but apparently everyone under 14 is a toddler now.
.
#6: Immersion blenders. Blades are sharp and because the button is on the side you can easily turn it on. I get that but it also says 1,250 kids a year under 14 go to the ER for blender injuries so considering the odds it doesn’t seem to be a widespread threat.
.
And as a close 2nd to hampers is #9….Spray Bottles!! Oh the horror! “Over 16 years 300k kids were injured from household cleaners and spray bottles were the most common culprit” and turning the bottle to off “just slows kids down” but isn’t enough to protect them.
.
I get that cleaners are dangerous and need to be stored out of reach but to say spray bottles alone are dangerous is a little over the top.
I think that is my issue with this whole article. It takes minor things and mixes them in with serious hazards like small magnets, button batteries or medications and makes them all seem equal. I mean medications was #7 and hampers was #1. You tell me what is more likely to harm a child!
.
The other thing is the age ranges. Its ridiculous to imply a 14 year old is in just as much danger from choking on a piece of candy as a toddler, but the way the article is written it acts as if 14 and 4 are all the same!
.
We are treating young adults as if they are small children and that they are all in constant danger! It all goes back to your whole thing of accurately judging the true risk of things, instead of saying everything is on the same super-dangerous category.
.
Well I just wanted to pass this along.
.
Take care,
.
Alisha
.

P.S. Kid near hamper! Maybe I better just put in an advanced order for a surgeon and seeing eye dog!

Lenore here: I note that the article quotes Dr. Gary Smith, who works at Nationwide Children’s Hospital and has previously suggested slapping “High Risk” labels on hotdogs (a child could choke), while a sidebar to the article suggests parents download the “Make Safe Happen” app, also sponsored by Nationwide, which, you may recall, gave us the Super Bowl commercial starring a dead child. 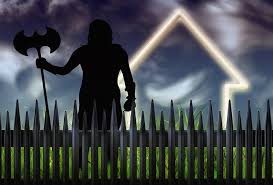 Take me to your laundry hamper.

The New York Times Says What We’ve Been Saying about Sex Offenders
What It Takes, Security-Wise, To Visit a School

70 Responses to The Hidden Dangers of the Laundry Hamper!