This week, Ikea made a akezrfkaea
sweeping recall of its 29,000,000 dressers sold in America and Canada:

After the deaths of three toddlers, Ikea has agreed to immediately stop selling dressers that too easily tip over, and to offer full refunds to millions of customers who bought them.

The recall applies to 29 million dressers, some sold more than a decade ago, including the company’s popular, low-cost Malm line. By Monday, Ikea’s website no longer carried the Malm models blamed in the deaths, which fail industry stability tests.

Details of the agreement, which a federal agency source briefed on the matter called “unprecedented,” are scheduled to be made public Tuesday.

The accompanying photo of the bureau with all of its drawers pulled out was scary — it looked like it could easily tip over. And I vividly recall me making my husband bracket our bookshelves to the wall when our kids were young — it was just too easy for me to imagine them being crushed. And Ikea did tell consumers to secure its dressers to the wall — as should every furniture and TV manufacturer, Â I guess.

That being said, I also wonder if any item not nailed down is ever safe enough. The pictures of the kids who died after the chests fell on them are heartbreaking, as are the quotes from their parents. And yet, 3 out of 29,000,000 = about 1 in 9,000,000. Is one death per nine million a truly reckless safety record? Does it prove the bureaus are outlandishly ill-balanced for not adhering to the American stability test?

I ask not out of any knee-jerk distrust of recalls, but out of real interest.Â An anonymous source from the Consumer Products Safety Commission was quoted in the Philadelphia Inquirer yesterday saying:

“It’s truly remarkable,” said the commission source. “A scope that we haven’t seen from the agency. It’s total capitulation by Ikea.”

“Capitulation” strikes me as an odd word. As if Ikea believed in its product but had to capitulate to our particular culture.

And today Reuters is reporting that Ikea will actually recall 36,000,000 dressers, responsible for a total of 6 children’s deaths since 1989 — that is, in Â the past 27 years.

Six deaths in 27 years. That’s about one every four years from an item that is incredibly popular.

All of which puts me in mind of the crib recall a few years back. So in the interest of spurring a discussion of Â what constitutes unacceptable risk (which isn’t just about furniture, it’s what we talk about all the time: Is it an unacceptable risk to have kids walk to school, considering every year some will die?), I am reprinting this pieceÂ of mine from 2010:

Some (Non-Mainstream) Thoughts on the Crib Recall

Hi Readers â€” Iâ€™m going to be blunt: The ban on the sale, resale and manufacture of all drop-side cribs does not make sense. Hereâ€™s why:

Over the past nine years, 32 children have died in these cribs. That is tragic. My heart sinks thinking about it. Â But â€” and yes, there IS a but, and this â€œbutâ€ does not make me a heartless bean counter, or a crazed Free-Ranger who laughs in the face of danger (I am, at base, a nervous mom) â€” we are talking about roughly 3 deaths a year in a country where about 4 million babies are born annually. That is, about one death per million.

That does not prove that the cribs are UNsafe. It proves that the cribs ARE pretty safe. Safer than stairs (1300 deaths/year), safer than eating (about 70 kids under age 10 choke to death on food each year), saferÂ than just sitting there and the next thing you know, youâ€™re bitten by a venomous spider (5 deaths/year).

I realize that these stats are jumbled â€” they are not the deaths of infants, whose main cause of death is birth defects (5623/year) â€” but my point is that 3 deaths a year from any cause for any large population is almost something that statisticians call â€œde minimus.â€ Not that these deaths donâ€™t count. Of course they do! But when a cause of death is that rare, you canâ€™t base your life on it, or you couldnâ€™t do anything. Go outside? No, there are spiders! Go downstairs? No, you could trip! Eat a sandwich? No, you could choke! (And then would you sue Wonder Bread?)

As for cribs, one reason the drop-side models seem so â€œdangerousâ€ is because they are so popular. When you have millions of people using anything, no matter how safe, the odds of an accident go up because the odds go up with the numbers. Thatâ€™s why itâ€™s more likely an American will die in a car accident than a bucking bronco accident. Doesnâ€™t mean that cars are inherently less safe than bucking broncos. The odds also go up because with millions of people assembling these things, some are bound to do it wrong, which seems to have been the case in many of these tragedies.

I donâ€™t want to get into a huge discussion of crib design, but the recall list includes some of the biggest baby-product manufacturers around, like Even Flo and Child Craft. I am sure they tested their cribs because no company deliberately puts dangerous products on the market, if only because they know they could be sued up the wazzoo. And childrenâ€™s product manufacturers know that better than anyone. Think of all the products recalled for tiny infractions, like a protruding screw….

These products are not “deadly.” Thereâ€™s a difference between a deadly product (cyanide) and a product that sometimes results in death (a grape). We keep obscuring that difference, and congratulating the folks who act as if it is only a lack of vigilance that allows anyone to die of anything other than old age….

The truth is: I love the idea of the government keeping us safe from dangerous products. It is the definition of â€œdangerousâ€ that has gone awry.

It’s hard to run any post like this, for fear of being seen as heartless, or anti safety progress, or simply a corporate shill. So I hope the discussion here will proceed about risk: how we perceive it, how we deal with it, and how our perceptions change the world our kids live in. – L. 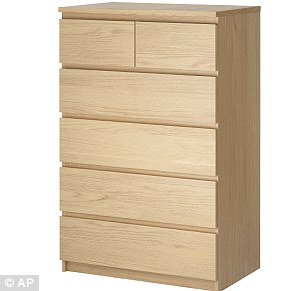 The dresser in question.

“Why I Will Not Volunteer for My Church’s Nursery Anymore”
The Buddy System is So Last Century! Now at Camp It’s the “Rule of Three”

69 Responses to The Ikea Dresser Recall