Great piece in The tsrstethfz
Calgary Sun by Michael Platt about the problem with anonymous complaints, like the one that forced a local family to take down its beloved tree swing a week or so ago (boldface mine):

The mind boggles to think of the kind of pucker-lipped sourpuss who’d call the city to squeal on two kids having a little fun outside, using the city’s largely-anonymous 311 application to avoid actually confronting the neighbour in person.

The anonymous caller system was, of course, birthed with the best of intentions: To keep citizens safe. Instead, it has turned into the easiest weapon any busybody — or ex-spouse, crazy cousin, evil neighbor, or chronic killjoy — can wield.

….the city is at the beck and call of all who complain…and the whims of the whiners taken seriously.

Part of the problem is, of course, insurance/litigation knot:

Because the tree is on the far side of the sidewalk, it’s technically city property, and now that the city is aware of the swing, they can’t let it remain because that would constitute an endorsement and that could lead to liability issues if someone is injured.

But the other part of the problem is that we can’t seem to accept the fact that there is a smidgen of discomfort or danger to almost everything in life, even very safe activities, like swinging. Instead, we act as if we can legislate out even the most minor of risk.

Thanks to 311, and a policy of responding to every call made… Calgary, with more than 89,000 bylaw complaints a year — has become a city ruled by cranks and the kind of people society used to mock, as stereotypical curmudgeons shouting “get off my lawn.”

But what can be done?

I was delighted to learn that there really is a way to fight this culture of complaint. Laws got us into this mess, laws can get us out:

Calgary can copy the policies used in other cities across Canada, including Edmonton, in refusing to accept anonymous complaints from the public.

Make the people filing the bylaw report own the grievance, with name, address and phone numbers, and you’re guaranteed to see the more cowardly complainers retreat back into sullen silence.

And then go even further, like Maple Ridge, B.C., where a maximum of three complaints a year can by filed from any one address, effectively neutering the chronic whiners, such as the Calgarian who filed 65 complaints in a matter of hours last July about weeds in neighbouring yards.

Finally, give the bylaw department the right to say no. Whether it’s instinct, logic or an eye for the frivolous, let the men and women who enforce this city’s rules ignore the kind of calls that demand kids take down a tree swing.

Don’t we want our government to be able to ignore the jabbering of a jerk? There is no reason to act as if all complaints are legitimate. Think of the “Suggestion” box at work — if your company complied with every idea, there’d be Coke flowing from the drinking fountain and a kitten in the chair at the head of the conference table. (Or maybe those were just my suggestions…)

When I worked in magazines and newspapers, the brass paid an inordinate amount of attention to the Letters to the Editor. They believed each complaint spoke for hundreds of readers who didn’t bother to churn out a gripe.

But sometimes a gripe is just a gripe from a griping griper. Our cities should be allowed to ignore them. – L. 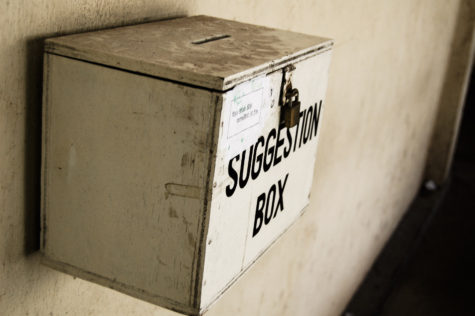 Sometimes you gotta think outside the box…and ignore the complaints in there.

47 Responses to The Problem with Anonymous Complaints (And Busybodies)