Loved bfnydkbbeb
this comment on yesterday’s post about the mom who let her son wait in the car for a few minutes, and ended up arrested. It’s from a reader named Lex:

A man was going down from Jerusalem to Jericho, when he was attacked by robbers. They stripped him of his clothes, beat him and went away, leaving him half dead. A priest happened to be going down the same road, and when he saw the man, he passed by on the other side. So too, a Levite, when he came to the place and saw him, passed by on the other side. But a Samaritan, as he traveled, came where the man was; and when he saw him, he surreptitiously videotaped him from a distance, and sent the recording to the Roman police, who arrested the man for indecent exposure.

That’s how the parable of the Good Samaritan went, right? 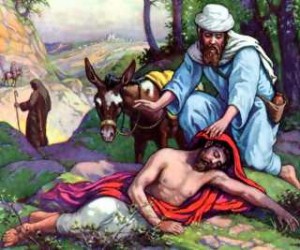 A Mom Lets Her Son Wait in the Car. An Onlooker Videotapes this “Crime”
Your Insights about the “Danger” of Letting Kids Wait in Cars

7 Responses to The (Updated) Parable of the Good Samaritan