In the morning, I like to take a walk with my friend, the mom of a 4-year-old. Lately, thanks to the terrible stories from Baton Rouge, Minnesota and Dallas, she says she has been feeling overwhelmed. Who hasn’t?

And yet…and yet… Â The narrative of chaos and despair obscures and even discounts a different narrative that does not make it to the nightly news. (Which is morning-ly and noon-ly news now, as well.) It’s a narrative you’ll find in the “Crime ydasfefsht
Stats” tab at the top of my blog. And I was excited to also find it today in this perspective-granting column by David Harsanyi:

There are plenty of ominous signs about cohesion, but weâ€™re not exactly in a civil war just yet. While long-term trends donâ€™t alleviate individual injustices or mitigate the grief and anger we experience about whatâ€™s going on, context matters. It matters mostly because discussing these events without placing them in some historical framework creates the type of hysteria that leads to false perceptions and then counterproductive policy.

His piece is partly about gun control which is, as always, an issue I’d prefer not to get into here, since it ends up being such an annoying and usually unproductive discussion. What DOES interest me are his observations about our refusal to acknowledge or even believe that crime is going down:

It’s not just my town, New York City, that has seen a grand plunge in murders. It’s even the cities where we think crime is Â escalating off the charts:

Stats from almost every city tell the same tale.

All of which is not to say it is anywhere near safe enough to be an African American pulled over by the police. But it is to say that the everyday fear we feel that prevents us from simply sending our kids outside in most neighborhoods (not all!) does not correlate with the crime rate. Nor does the belief thatÂ any child waiting in a car for a few minutes will likely be kidnapped.

Despite this reality, according to a 2013 Pew poll, 56 percent of Americans believe gun crimes have risen compared to 20 years ago. This even though overall gun death rates have declined â€” and letâ€™s include homicides and suicides (most gun deaths are suicide) â€” by 31 percent over that period.

We believe a lot of things that arenâ€™t true. In a 2015 Rasmussen poll, 58 percent of Americans said they believed there was a â€œwar on police.â€ The murder of five officers in Dallas last week was the worst attack on law enforcement since 9/11. It is in no way to diminish the impact of this event or the lives lost that day to say that the overall trend shows police are not in more danger today than they were 20 years ago. The violence aimed at police has generally followed all other trendlines of violence, which is to say it has decreased.

And when it comes to African American realities, Harsanyi added this:

The recent deaths of a number of African Americans at copsâ€™ hands is also highly troubling, but the debate about it is imbued with a number of societal issues that go beyond mere stats. Itâ€™s also far more complicatedÂ than conventional thinking might suggest. While that debate rages, itâ€™s important to note that African Americans are not only safer today than they were 20 years ago (and certainly 50 years ago), they have benefited tremendously from lower crime rates. Over the last 20 years, crime among African-American youth has fallen by 47 percent.

Watching the news can make you feel like weâ€™re on the cusp of falling into a dark time. Maybe weâ€™re destined for a more violent age. Yet it seems the technological and economic advances weâ€™ve made (despite inequality, most Americans live better lives) make it unlikely weâ€™re going to return to 1994- or 1968-style violence any time soon. But who knows? Itâ€™s also understandable that emotionally we deal with the incidents that unfold in front of us. Still, it wouldnâ€™t hurt the media to frame the news with a little less scaremongering and a little more context.

It is hard to ask for context without being accused of complacency. I am not complacent. Let us work to make the country safer for all citizens, while also appreciating the fact that it is no less safe than when WE were allowed to go outside as kids. – L 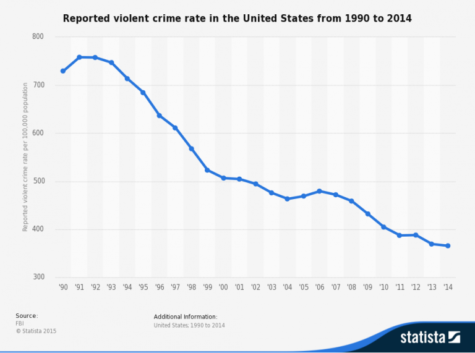 What Happens When You Set Off the TSA “Groin Alarm”
Get Ready for a Truly Pleasurable (And Quick!) Cry

46 Responses to “These Are Such Terrible Times”