Imagine a world where a brief encounter between young people and strangers does not automatically warrant police involvement — or a news report.

Now imagine you were in central Massachusetts yesterday where this “behavior” took place, in broad daylight. Would you call the cops? The TV stations? Would you beg “anyone with credible information about the incident” to call, as if there’d been a mugging, or murder?

The 2016 answer is yes, as this zeryaynhah
story from WCVB attests. I’m reprinting it in its entirety in case you might otherwise assume I’m leaving out some salient details, like, “All the young men had guns,” or, “A small amount of heroin exchanged hands,” or even, “The driver appeared to be Kanye West.”

BOSTON â€”Police in central Massachusetts are warning residents to be on the lookout for men who may be challenging passersby to a rap battle.

Charlton police said a black SUV with two or three men in their late teens or early 20s inside, pulled up to three young teenage boys on Dresser Hill Road at about 3 p.m. on Saturday.

One of the men — described as having brown hair and a pale complexion, wearing a gray T-shirt, gray pants and open-toed sandals — got out of the vehicle and started rapping while the other men asked the boys if they wanted to “spit some bars” with them.

When the boys declined, the SUV drove off.

“Although this was suspicious behavior and frightening to the boys, nothing made this appear to be an attempted abduction,” Charlton police posted on Facebook.

Anyone with credible information about the incident is asked to call 508-248-2250.

Phew!Â That was a close one! Certainly the last thing we want to see kids doing is bursting into song.

So, Charlton citizens, you’ve been warned: Suspiciously musical young men are out there. Let’s get in for some questioning, Â before they become a one-van rhyme wave. – L 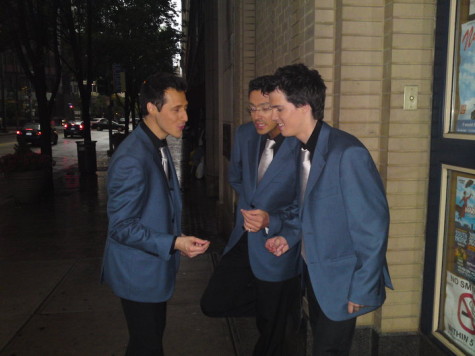 Officer! Officer! There are some young men SINGING on my corner. HELP! (This group happens to be the Earth Angels.)

“It’s Not Appropriate for Your Son to Walk Home Unaccompanied Until Middle School” — How to Fight Back
How Can We Expect Kids to Suddenly Love the Outdoors?

56 Responses to This Does Not “Appear” to be an Abduction Attempt, Say the Cops (About Singing Incident)