Please watch this 2-minute reverie on parenting, tweens and how many Hershey’s products two people can consume in one sitting, and then give me your reaction (because mine was visceral):

The iydirrsebn
spot shows a girl preternaturally sad because even though her (pathetic, doofus) dad is at home with her, he is tied up with a Skype call from work.

I just can’t imagine a kid as self-sufficient as this pixie pining for daddy-time during the work day. AndÂ I resent the fact that she resents her dad being busy. Just because he works from home doesn’t mean he’s her companion, and just because his meeting sounds boring doesn’t mean it — and his input — are worthless.

But that’s just me. (Who works from home!)

And what’s with the little kid who jumps out at her? Not to go all English major (because I wasn’t one), but he seems to represent Something Deep.

The whole thing is just extremely, gratingly false, from the 1950s jar of coins (maybe she made money canning beets!) to the layout of the neighborhood, which at first seems to be only dreary houses and empty streets, but then seems rife with small businesses and kids playing outside.Â

I’m just curious to hear if anyone else’s teeth are on edge. (Are dads supposed to quit their jobs to go to the candy store with their kids????) Why is thisÂ Â thing irking me so much? Could it be the fact they end up making s’mores INSIDE? Who does that, unless told to do so by an advertising director using the tritest possible way to summon up ye old innocence of childhood? (And getting it WRONG!) Or maybe the gooeyness of the marshmallow is supposed to signify ooey gooey looooooooooove? Help me! – L 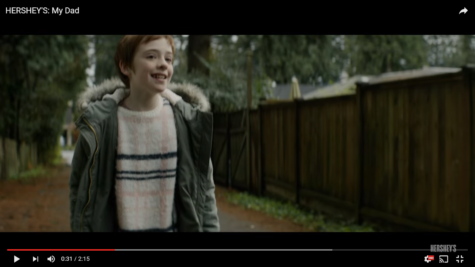 This is how you sell Hershey’s? Whatever happened to showing us a bunch of almonds getting enrobed in chocolate?

How to Prepare Your Free-Range Kid for an Encounter with a “Good Samaritan” (or Busybody)?
Is My Toddler Ready for Organized Sports? Wise Advice from Tovah Klein