UPDATE! znkrdznyze
It will come as no shock to readers of this blog that the shirt on the windshield Â turned out NOT to be a bold new way to kidnap and sex traffic mall workers, but was in fact a “random prank.” Imagine that.

On my Yahoo news feed comes this story of a young Michigan woman who found a shirt wrapped around one of her windshield wipers. Admittedly, that is odd. But odder still is how this non-event has gone viral — 100,000+ shares — along with breathless warnings about how we must all be on the lookout for shirt-wrapped wipers, or woe betide us!

If you were getting into your car late at night and saw a shirt wrapped around your windshield wiper blade, what would you do? ItÂ happened to one Flint, Michigan teenager, who immediately drove away â€” but herÂ warning to others about the incident has quickly gone viral.

Ashley Hardacre, 19, wrote on Facebook earlier this month that afterÂ leaving her mall job late one night and getting into her car, she noticed a flannel shirt on her windshield. She tried to get it off with her wipers, but it was wrapped tightly around one of the blades. Sensing something was wrong â€” and seeing two cars parked nearby, one that was running â€” she says she drove away with the shirt still attached to herÂ car.

Can we say this for the zillionth time? It is indeed GOOD to be alert, and to trust your instincts — especially if all they have you doing is driving your car where you were going anyway.

But the leap to, “OMG, she was almost kidnapped!” is , er, seemingly unwarranted. Even the local police, God bless them, say that they have never heard of this shirt technique before. (Ah ha! Just shows you how nefarious it is!)

â€œLuckily I knew better than to remove the shirt with cars around me, so I drove over to a place where I was safe and quickly rolled down my window and got the shirt off.â€

It’s like living in “Taken 4: This Time It’s a Flannel Shirt.”

So remember security guruÂ Bruce Schneier’s “Movie Plot” warning: The more a crime sounds like the plot from a movie, the less likely it is to happen in real life.

He was talking about terrorism, but let’s expand it to include flannel-based felonies. – L 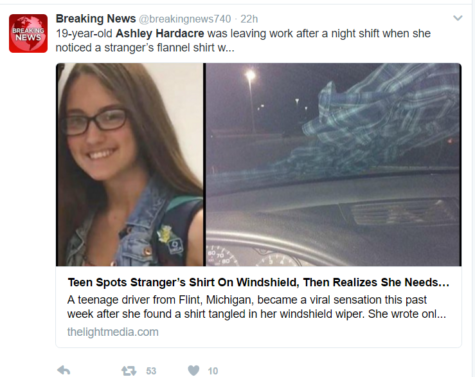 Why Aren’t Kids Playing Outside on Their Own?
Child Protection Workers Remove Children from 68,000,000 Unfit Parents

41 Responses to UPDATE! “This teenâ€™s warning has people looking out for shirts wrapped around their windshield wipers!” Um, Why?