Readers — Here’s a piece from Tasha Batsford, “a working mama of three small children,” who writes about her parenting journey at www.maybediaries.com. dttarfzket
She lives in New Zealand.

The Downfall of The Baby Sling by Natasha Batsford

For millennia, women the world over have been taking the fabric at their disposal and using it to tie their babies to their backs. While the practice largely died out in the 20th century, it has recently seen a revival and there are now a large number of businesses, from international organisations to work-at-home moms, creating their own interpretations of the traditional baby sling.

Can mindless bureaucracy be far behind?

In 2010, the CSPC (Consumer Product Safety Commission) forced a major recall of a “bag” sling after it was held liable in the death of an infant, and made a move to extend this recall to all baby carriers. Enter stage right the BCIA (Baby Carrier Industry Alliance), created by the sling manufacturers to be a regulatory and advocacy body within the baby carrier industry.

For five years, BCIA and CSPC have been working on turning the current voluntary safety standards into compulsory legislation.

When the upcoming regulations were opened to public consultation, some weavers voiced their opposition. Their view was that it doesn’t matter how much you tested the fabric, what makes carrying safe is education, and that if used incorrectly, any carrier can pose an inherent danger to an infant.

This is not something the CSPC had considered, and naturally it’s is not something that they can legislate on, and so, spooked by potential deaths they might unleash on the American public, the CSPC is now considering banning the sale of all ring slings, pouches and wraps.

So what is the motivation here?

If the aim is the safety of children, then I’m sorry CSPC, you’ve got it wrong.

Banning people from selling a length of woven fabric is going to achieve as much as banning the sale of plates to protect people from the risk of heart disease.

Let’s remember, there is already a voluntary code in place which has proven effective in protecting consumers, and there are already well researched guidelines on how to keep a baby safe while in a carrier.

The new legislation is being heralded as the champion we need to keep babies safe from the dangers of unscrupulous profiteers. I say it’s just another case of swapping laws for common sense. – NB

Lenore here:  I think it’s possible that some newfangled slings that aren’t just a piece of fabric are designed badly, and am not against somehow keeping those off the market. But I do agree with Tasha that there is something wrong with the basic assumptions that 1) An ancient product is inherently defective, even though thousands of years of history would suggest otherwise. And 2) If only it were regulated, no one would ever get hurt again. (See my musings about this at “Some Non-Mainstream Thoughts on the Crib Recall”)

Anyway, having never used a sling, I asked her to explain them a little more to me and here’s what she sent: 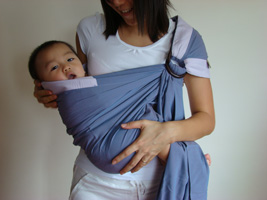 Is the sling shot?

35 Responses to Tied Up in Baby Sling Regulations