October 5, 2017
One bhekfitbfk
more time: Most humans saying hello to a child in public are not doing anything evil.
Â .
Those who report them to the police, on the other hand…
.

Dear Free-Range Kids:
.
I thought you would be interested in this Facebook post to one of my groups today. It was the Blue Mountains Community Social Group, over here in Australia. The person who posted it reported that she saw it pasted up in a local shopping centre. Weâ€™re a fairly small, regional community, about 100km from Sydney.
Â .
Iâ€™m happy to say that of the 93 comments (so far) and 227 reactions, the vast majority have leapt Â to the defense of the 80-year-old man, and have expressed despair for the sorry state of a world where a male person is unable to have a conversation with a stranger child without being branded a â€œpedo.â€
Â .
Phew,
Margot
. 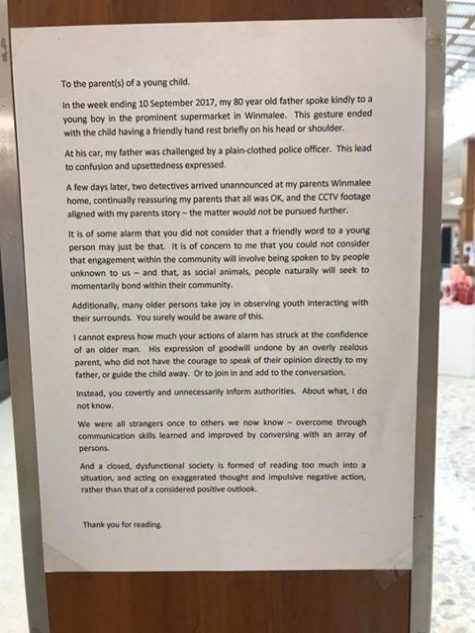 From a small town an hour outside of Sydney, Australia.

In case you can’t read it it says:

To the parent(s) of a young child.

In the week ending 10 September 2017, my 80-year-old father spoke kindly to a young boy in the prominent supermarket in Winmalee. This gesture ended with the child having a friendly hand rest briefly on his head or shoulder.

At his car, my father was challenged by a plain-clothed police officer. This lead to confusion and upsettedness expressed.

A few days later, two detectives arrived unannounced at my parents Winmalee home, continually reassuring my parents that all was OK, and the CCTV footage aligned with my parents story — the matter would not be pursued further.

It is of some alarm that you did not consider that a friendly word to a young person may just be that. It is of concern to me that you could not consider that engagement within the community will involve being spoken to by people unknown to us — and that, as social animals, people naturally will seek to momentarily bond within their community.

Additionally, many older persons take joy in observing youth interacting with their surrounds. You surely are aware of this.

I cannot express how much your action of alarm has struck at the confidence of an older man. His expression of goodwill undone by an overly zealous parent, who did not have the courage to speak of their opinion directly to my father, or guide the child away. Or to join in and add to the conversation.

Instead, you covertly and unnecessarily inform authorities. About what, I do not know.

We were all strangers once to others we now know — overcome through communication skills, learned and improved by conversing with an array of persons.

And a closed, dysfunctional society is formed of reading too much into a situation, and acting on exaggerated thought and impulsive negative action, rather than that of a considered positive outlook.

Thank you for reading.

Ad thank you, whoever you are, for writing, and reminding us of our humanity. 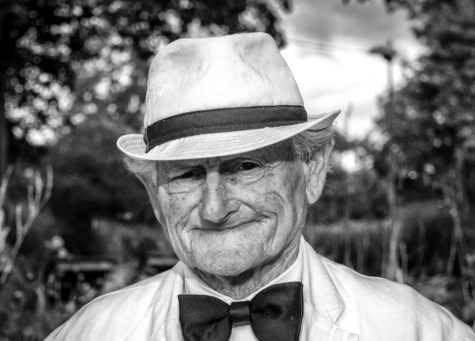 An old man talked to my child in public, officer! Go get him!