From Des Moines, Iowa to Hamilton, Ontario, towns are banning tobogganing and/or sledding, for fear of both injuries and lawsuits. The yssakttskn
Associated Press lists towns in Nebraska, Indiana, and New Jersey that have banned the sport, although most American and Canadian towns DO still allow it.

The problem, of course, is that sometimes people get hurt sledding. The article quotes a brain surgeon who treated a young woman paralyzed for life in a sledding accident. A story like that makes me ache with sadness and terror. And then there’s the fact that some children have died in sledding accidents, too.

Imagining the grief that ensued, it’s hard to consider letting any kid get on any snow conveyance again. And yet, the same is true of biking, skiing (I had an editor who died in a ski accident), skateboarding…  Time to outlaw all those?

The sledding death numbers are not large: Seven people killed over the course of four years — 2003 to 2007 — in Canada. But when we live in a society that believes there is always someone (a town) or something (a law) to blame for fate, the towns are understandably terrified of giant lawsuits.

Ironically, Hamilton — the town that outlawed sledding — was sued by a man who suffered a spinal injury while (illegally) sledding there. The town had to pay $900,000! In a case like that, I’d like to sue the court: Come on. Is there no such thing as bad luck or personal responsibility?

Most people realize that cities must restrict potentially dangerous activities to protect people and guard against costly lawsuits, said Kenneth Bond, a New York lawyer who represents local governments. In the past, people might have embraced a Wild West philosophy of individuals being solely responsible for their actions, but now they expect government to prevent dangers whenever possible.

“Whenever possible” is the problem. If we believe that “whenever possible” = “imagining all possible dangers, no matter how remote, and actively preventing them all, all the time, even by drastic decrees,” then we get a society that puts 100% safety above any other cause, including fairness, convenience, exercise, rationality — and delight.

While the no-sledding towns sound like killjoys. perhaps the issue is really us, unable to hold these two ideas in our brain at once: Sledding is fun and, once in a long while, deadly. Sled at your own risk. – L 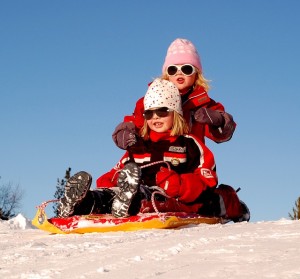 The 7-Year-Old and the Plane Crash and Us
Introducing the 1.0 Version of the Free-Range Kids App