Readers – –This bhkdfdryek
is an amazing article from The New Republic by Jenny Jarvie about a phenom called “trigger warnings” — warnings written on blog posts and, increasingly, everywhere else, that tell folks that the material they’re about to read may “trigger” awful thoughts:

But they kept spreading, and now:

Last week, student leaders at the University of California, Santa Barbara, passed a resolution urging officials to institute mandatory trigger warnings on class syllabi. Professors who present “content that may trigger the onset of symptoms of Post-Traumatic Stress Disorder” would be required to issue advance alerts and allow students to skip those classes…. [Elsewhere]  Warnings have been proposed even for books long considered suitable material for high-schoolers: Last month, a Rutgers University sophomore suggested that an alert for F. Scott Fitzgerald’s The Great Gatsby say, “TW: suicide, domestic abuse and graphic violence.”

How does this have anything to do with Free-Range Kids?

We are constantly fighting the belief that kids are in danger from everything: “Creeps, kidnapping, germs, grades, flashers, frustration, failure…”And yet, the assumption of fragility pervades our culture, from infrared monitors to watch baby at night — as if SLEEPING is dangerous — to now these warnings on college classes, as if THINKING, or even having a MISERABLE MOMENT is dangerous.

On this blog and in my speeches, I always try to explain that it’s not a million individuals who have suddenly decided to frantically helicopter parent, it’s a society TELLING us that if we DON’T supervise every afternoon at the park, our kids will be snatched, just as surely as if we don’t buy the latest educational toy, or serve exactly the right food, or enroll our kids in the very best program, they’ll end up stunted, illiterate, unloved and unemployable. But the real danger is this:

By framing more public spaces, from the Internet to the college classroom, as full of infinite yet ill-defined hazards, trigger warnings encourage us to think of ourselves as more weak and fragile than we really are.

Fight the assumption of fragility. Be strong!  – L. 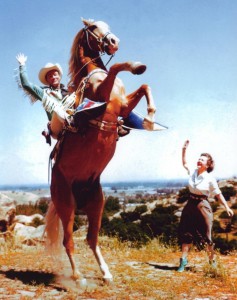 Now THIS lady could use a Trigger warning.

Long May She Wave!
CPS and Free-Range Parents

172 Responses to Trigger Warnings and the Assumption of Fragility