Â Hi arhrndnrth
Folks! This post comes to us from Emily Oster, an economics professor at the University of Chicago, and the author ofÂ Expecting Better: Why the Conventional Pregnancy Wisdom is Wrong â€“ and What you really Need to Know.Â She tweets @ProfEmilyOster and she’s a non-alarmist. Woo-hoo! – L.

FEAR AND THE PREGNANT WOMAN by Emily Oster

When youâ€™re pregnant, it can sometimes seem like you should be afraid of everything.Â  Even some things you may not have thought of.Â  Last week I saw an article about how you shouldnâ€™t swim (causes asthma in your kid later, I guess).Â  A few months ago one of my Chinese friends was horrified to learn I hadnâ€™t worn a radiation vest while working at my computer during pregnancy.

Iâ€™m an economist â€“ my job is data â€“ and when I was pregnant I spent a lot of time combing through studies and data in the hopes of identifying which risks were real, and which were exaggerated.Â  The result was my book, Expecting Better, and in it I suggest that a lot of pregnancy risks are exaggerated.Â  A little bit of coffee?Â  Fine.Â  A little bit of deli ham?Â  Probably also okay.Â  Sushi?Â  Yes.

Some of the rules are there for good reason (tobacco is a definite no-no, as are hot tubs) but I make the case that pregnant women should be able to live with a lot less fear.

Since the book has come out Iâ€™ve heard from a lot of women who love this message.Â  But Iâ€™ve also heard from some who feel that itâ€™s all well and good to know what the risks are, but theyâ€™re still going to avoid everything.Â  Their reasoning, often, is that if something did go wrong â€“ even if for a reason having nothing to do with their behavior â€“ they would blame themselves unless they did everything perfectly.

A post on the Motherlode blog made this point plainly: the author lost a baby to listeria, and even though she doesnâ€™t know what the source of the infection was, she still blames herself for a few deli sandwiches during the pregnancy.

The possibility that you might feel this way is certainly something women should think about in making these choice, but it is also something I think we should fight against.Â  Women â€“ mothers â€“ increasingly seem to feel like it is our fault if anything goes wrong with a pregnancy, or with our children.Â  Forget about going wrong, we blame ourselves if our kid isnâ€™t perfect in every way.

Shortly after my book came out, someone emailed me, distraught, having had a miscarriage.Â  She wanted to know if she might have caused this by pumping her own gas, or by having a single glass of wine before she knew she was pregnant.Â  Of course the answer was no, but I felt sad that she even needed to ask.Â  I am all for the idea of taking appropriate cautions, and of doing what is best for our kids.Â  But I also think we need to ease up on the guilt.Â  By doing so, we may dial back the fear, as well. – E.O.

Lenore here: I so agree that we have gone overboard blaming ourselves (or worrying we will be blamed) if anything goes wrong with our kids at any stage of their lives, beginning in the womb. In my lectures I talk about how, for instance, the “What to Expect” book tells readers to consider EACH BITE a chance to give their baby better odds and possibly even a better life. Nine months is a lot of bites to think hard about, and the flip side of trying to be “good” is that any step off that tightrope of perfection feels like YOU are to blame if your child isn’t perfect.

This whole outlook feels less like a new age kind of healthy mama perspective and more like Henry the VIII who blamed Anne Boleyn for having a child with birth defects. I’d really like to move forward, not backward, when it comes to thinking pregnant women can control all outcomes if only they are more strict, vigilant and self-sacrificing. Or, in Anne Boleyn’s case, if they’d only stop consorting with the devil. – L.Â 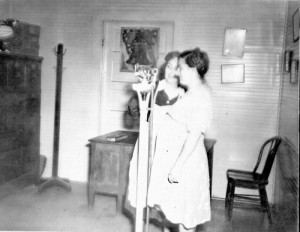 I hope she didn’t eat a single less-than-optimal bite!

Is 25 the New 18?
Overreaction Nation: The Pocket Knife at Camp

106 Responses to Trying to be Perfect while Pregnant