September 8, 2015
.
Following yktsrsbyke
up on our discussion of the security theater at Chuck E. Cheese (and what DOES that “E” stand for?), here’s a little rant about the TSA.
.
I post it mostly because it links to such a truly fun video (below). I laughed out loud. But the TSA’s “You May Be a Terrorist If…” list of behaviors actually reminds me of “You may be a predator if…” — the way that schools send out bulletins alerting parents that, “A man was seen near the bus stop,” or, “A van slowed down by some children today.”
.
We see the same overkill in the, “You may be a child abuser if…” category, including, “You left your sleeping baby  in the car while you got a smoothie,” which is literally what happened to a guy I got a letter from this week. He went in, could see his sleeping baby through the window of the smoothie place, AND was out again in about 2 minutes. But onlookers threatened him and photographed his license plate. The guy is about to start his Navy SEAL training, for gosh’ sake. I want him to be able to trust his instincts, not a society that fetishizes elaborate safety charades over actual safety smarts.
.
So, anyway. Here’s the letter I got:
.

Dear Free-Range Kids: This summer my 92 yo grandfather, 64 yo mom, me 35, and my 7 yo daughter  flew to Reno.
.
I have issues walking and was in a wheelchair along with my grandfather who has some dementia and had just fallen a few hours earlier seriously injuring his arm. He was in a splint and his arm was very painful to move at all. Well you guessed it, we got pulled for extra screening.
.
The screener made us both get up out of our chairs so he could wand us, pat us down and wipe us with the explosive detection paper. He was being very rough with my grandpa and yanking his arm, when I reached over to try and help my grandpa take his sling off, as the screener was demanding he do so he could check it for explosives, he screamed at me to “not touch him” and told me if I tried to touch my grandpa again we would be detained. My grandpa is hard of hearing, confused and was in pain so he had no idea what was going on.
.
My mom also had forgotten to dump my daughter’s small water bottle that was maybe 1/4 full. I offered to drink it but was again told I couldn’t touch anything so my mom was escorted by a guard outside where she could dump the water then had to go all the way thru the security screening again even though she was with a guard the whole time.
.
I also have metal plates in both legs and despite having major scars and a medical card saying I have metal implants it is almost always an issue and once resulted in me being stripped to bra and panties to be screened while standing behind a paper “privacy” screen that anyone going the opposite direction down the hall could see around. Can you guess why we hate to fly?! After watching this video I can see why we set off all sorts of red flags! My daughter talks to everyone and asks questions, I fidget, my mom gets really stressed and breathes heavy and my grandpa is obviously just prime terrorist material! Enjoy! Watch the video! — Alisha 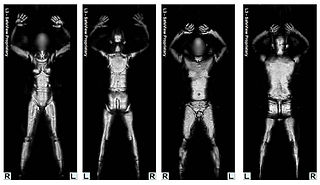 End game: Let’s treat everyone in the world as if they are out to get us.

check point, grope, no liquids, pat down, safety theater, terrorism, TSA, you may be a terrorist

New Crime: Asking for Directions While Male
Zach Anderson, 19, On Sex Offender List for 25 Years for Consensual Teen Sex, to Get New Trial

48 Responses to TSA and FRK