Dear Free-Range Kids?Â I could have written this letter [about being scared to let a child, 10, walk to school on his own] 4 years ago.Â  We lost our bus service and most parents opted to drive their kids to school but a small group of students (my son was one) wanted to bike to school. So I let him.

We did practice runs before school started and had lots of conversations about “what ifs”.Â  Learning together the route and where safe places to go along the way helped a lot. His circle of friends expanded to include his commuting friends.Â  They are a close knit bunch and great kids. I bet your 10 year-old knows others who walk to school and that’s why he is asking for this independence.Â  Maybe you can have him meet up with friends (strength in numbers!)to help you with giving him freedom.Â Â The responsibility of biking to school transferred into other areas of his life.

His grades improved (he was always the first one in class each morning) from B’s to A’s.Â  He is more confident and independent- he can get his baseball gear together and ready for practice without being asked.Â  He gets odd jobs (dog walking, shoveling snow,watering plants, babysitting) because neighbors recognize him and know he is a responsible kid and trustworthy.Â  He biked 5 younger kids (three 1st graders) last year to school and won a citizenship award for community service. He was beaming.As for cell phones, we didn’t get one until he turned 12 and needed it for middle school.Â  They can be more of a distraction and crutch for parents. Most of the problems that came up were handled without any adults needed.Â  Busted bike? He just ran the bike home.Â  Wipeout and shredded knees?Â  Bandaids and encouraging words from friends got them home to get cleaned up by a parent.Â  Kids this age have the capacity to solve most problems without needing to call an adult for every glitch. So go for it!Â  He sounds like a great kid.

And here’s ANOTHER letter!

When my son was 10, he decided he wanted to bike to school. In lobbying me, he even went on Mapquest to measure the route – 1.61 miles – and show me the path he would take. Since he had to cross a major street (with stoplights but no crossing guard), what I did was ride my bike with him the first week, to make sure that he was indeed paying attention to traffic and crossing with the light (he has ADHD/borderline ASD, so impulse control was a concern), then let him go to it. There were a few times the crossing guard at the school had words with him because he kept “forgetting” to get off and walk his bike once he was on school property, but losing his biking privileges a couple times got the message across.

Benefits – not only did he get extra exercise twice a day, but he also ended up making friends with other walkers/bikers. For a kid who struggled to connect with other kids, this was huge.

The glow on his face when he’d come home and tell me how he and his friends had stopped at the local deli to buy lemonade and cookies on the way home was priceless. And even better, when I would pick up lunch at that same deli, the workers would compliment his behavior and tell me how polite he was. (All this, while the school considered him a behavior problem in the classroom for not being able to sit still and work quietly.)

Three years later, he’s still walking or biking when the weather is good, classroom problems have nearly disappeared (in a new school that understands active boys much better), and still glows when he talks about stopping for a snack at local businesses with his friends. 🙂 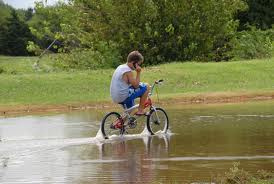 Caution: Tasks may be easier than they appear.

29 Responses to Two Moms Write: “I Was Scared, but I Let My Son Get to School on His Own”