Thatâ€™s right: a Free-Range Kids clause made its way into the Every Child Achieves Act, a re-authorization of major federal law that governs funding and regulation of elementary education in the United States.Â The Free-Range portion would permit Â kids to walk or ride their bikes to school at an age their parents deem appropriate, without threat of civil or criminal action.

This gives autonomy back to the parents when it comes to how much freedom we want to give our kids. It’s like the Free-Range ibiyiasesf
Kids & Parents Bill of RightsÂ proposed here a few months back,Â which states that our kids have the right to some unsupervised time and we have the right to give it to them without getting arrested.

Busybodies, beware! Your reign could be coming to an end. Just because you think a child is too young to be outside unsupervised doesnâ€™t mean you will forever be able to summon authorities to investigate or arrest the parents.

If this hadÂ been the law of the land when the Meitivs allowed their kids to walk home by themselves in Maryland, it might have prevented the whole shebang. (Though, admittedly, the kids were walking home from the park, not school. Still.)

While right now the major threats to Free-Range parents are at the state and local level, Sen. Lee’s office told me in an email that Â he had been looking for some way to get federal support for their rights.

Now that Every Child Achieves has passed in the Â Senate, the next step is for the House of Representatives and the Senate to hammer out any discrepancies between their respective bills before re-voting and sending the legislation to Pres. Obama.

That means Obama could sign actual Free-Range legislation into law.

In the end, Lee’s office told me in an email, “Senator Lee was unable to support the final version of the bill, but he was happy to see this amendment included.”

Over here the reaction is ecstatic. WOW.Â Here is the Free-Range section of the law:

SEC. 9116. RULE OF CONSTRUCTION REGARDING TRAVEL

TO AND FROM SCHOOL…

â€˜(a) IN GENERAL.â€”Subject to subsection (b), nothing in this Act shall authorize the Secretary to, or shall be construed to (1) prohibit a child from traveling to and from school on foot or by car, bus, or bike when the parents of the child have given permission; or (2) expose parents to civil or criminal charges for allowing their child to responsibly and safely travel to and from school by a means the parents believe is age appropriate….

“Notwithstanding subsection (a), nothing in this sectionÂ 15 shall be construed to preempt State or local laws.â€™â€™ 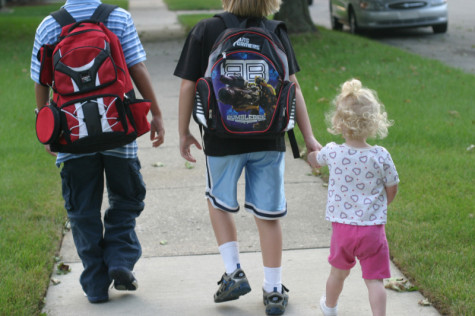 U.S. Senate passes law that would allow PARENTS to decide what age their kids can walk to school.