Hi eikantdybb
Readers — What a story! The boys traveled by themselves, over a thousand miles, to meet the President.

Okay, so it happened in 1910. Still, what  a great reminder of what kids are CAPABLE of ! And today we dither about sending them to play at the park before dinner! Jeez Louise — let’s get a little perspective! Here’s the Wikipedia entry about the amazing Abernathy boys — Louis and Temple:

In 1909 the boys rode by horseback from Frederick, Oklahoma, to Santa Fe, New Mexico, and back. Louis was nine, and Temple was five.[2]

When the boys completed their Santa Fe journey, they began planning a cross-country horseback ride to New York City, again by themselves, to meet Theodore Roosevelt when he returned from his trip to Africa and Europe. They made that trip in 1910. They were greeted as celebrities, and rode their horses in a ticker-tape parade just behind the car carrying Roosevelt. While in New York, the boys purchased a small Brush Motor Car, which they drove, again by themselves, back to Oklahoma, shipping their horses home by train.[3][4][5]

In 1911, they accepted a challenge to ride horseback from New York to San Francisco in 60 days or less. They agreed not to eat or sleep indoors at any point of the journey. They would collect a $10,000 prize if they succeeded.[6]

After a long trip, they arrived in San Francisco in 62 days, thereby losing the prize but setting a record for the time elapsed for the trip.

In 1913, the boys purchased an Indian motorcycle, and with their stepbrother, Anton, journeyed by motorcycle from Oklahoma to New York City. This was their last documented adventure. 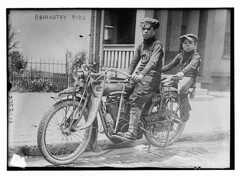 There they are! And here’s a  lovely song by a descendant  — with fantastic old photos in the background. – L

Have a _______ Summer: What Does it Say on YOUR School’s Billboard?
Are Moms So Desperate for Safety That They’ll Buy Anything Marked “Safe”?

29 Responses to Unaccompanied Minors: Boys, 10 and 6, Travel Solo from Oklahoma to New York City — by Horse!