Readers — A bunch of you have been sending this ddiyhnzhan
fantastic story from New Zealand, where a school abandoned its plans to build a fancy, new playground because there were just too many regulations and expenses. Instead, it decided to let kids play the old-fashioned way, by making their own fun.

The results? Astounding. As the principal noted: “When you look at our playground it looks chaotic. From an adult’s perspective, it looks like kids might get hurt, but they don’t.”Â What’s more:

Mudslides, skateboarding, bullrush [which sounds like Kiwi Red Rover] and tree climbing kept the children so occupied the school no longer needed a timeout area or as many teachers on patrol.

Yes, amidst the chaos of free play, discipline problems DECREASED!Â As the principal explained:

“The kids were motivated, busy and engaged. In my experience, the time children get into trouble is when they are not busy, motivated and engaged. It’s during that time they bully other kids, graffiti or wreck things around the school.”

Grant Schofield, a professor of public health who studied the playground experiment, said:

“The great paradox of cotton-woolling children is it’s more dangerous in the long-run.”

Society’s obsession with protecting children ignores the benefits of risk-taking, he said.

Children develop the frontal lobe of their brain when taking risks, meaning they work out consequences. “You can’t teach them that. They have to learn risk on their own terms. It doesn’t develop by watching TV, they have to get out there.”

How fantastic that a school undertook this experiment and that it was studied. Here’s to more “beneficial risk!” – L 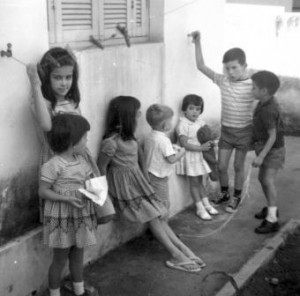 What do kids need to feel excited and engaged?