Readers — It is with joy that I inform you that the seasdyytef
Boulder Public Library has voted to junk its “No children under age 12 in the library without an adult” rule and replace it with the far better rule that kidsÂ in need of supervision must be accompanied by an adult.

What a wonderful decision. You may recall that the original ruling, discussed here,Â stated: “The libraries are public buildings, and, open to everyone.Â  Because the library is a public place, a childâ€™s safety cannot be guaranteed.Â Â Children may encounter hazards such as stairs, elevators, doors, furniture, electrical equipment, or, other library patrons.”

This was not only bizarre (seriously — kids were threatened by FURNITURE? Were they running headlong into those newfangled things called tables?). It punished well-behaved kids for the antics of poorly behaved ones, and robbed parents of the time to even browse for a book in the adult room because they were expected to chaperon their children at all times. Â Like Zero Tolerance laws in schools, it also prohibited librarians from using their common sense to distinguish between miscreants and quiet kids who simply wanted to spend time at the library on their own. So kudos to the library commission member who found a behavior-based set of rules to implement instead:

Commission member Anne Sawyer suggested using Poudre River’s language, at least as an interim policy while library officials look at the issue in more depth, because it lets parents determine whether their child is mature enough to be alone in the library. However, it also makes it clear that library employees aren’t responsible for children left unattended.

“We heard from a lot of the public that 12 years old was too old and these kids are often in middle school and get themselves to and from school and have a lot of liberty,” said Sawyer, recalling that she often went to the library by herself as a child. “It’s a great transitional place where children can learn to be on their own.”

I’m so grateful when people can think back to their own childhoods and recall the value of the independence they were granted, rather than simply snapping, “But that was then and times have changed.” Let’s hope that more libraries consider a child’s behavior rather than age when insisting upon adult supervision. – L. 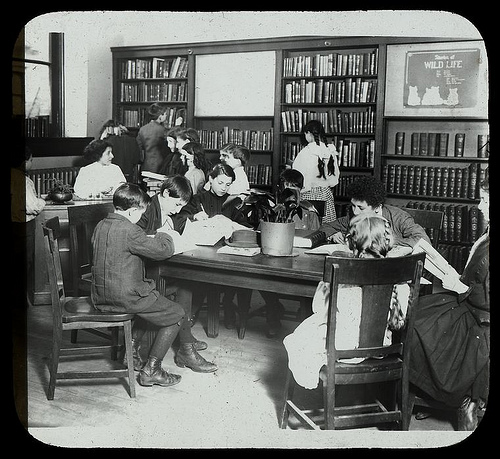 21 Responses to Victory! Boulder Library to ALLOW Kids Under 12 Without their Parents