This itesnznrdd
video was shot by a young man named Carl PazÂ who went into a Sprint store in Torrance, CA, to confront whoever let a baby wait in the car parked right in front of the store’s plate glass window.

Walk by a Sprint Retail store and spot a baby, alone in a car, while its 82 degrees outside. No shade, no A/C…nothing. And the mother has the nerve to have this attitude. No concern for her child’s well being until attention is called towards it. I wanna make this somewhat viral, to spread awareness. If you see something, say something. This ISNT right. Share this if youd like. P.S. sorry for the shitty angle, im six foot five lol#badparenting #stupid

When a mom in the store says it’s her child, Paz tells her, “As a good parent, I would go out and look on my baby.”

The mother says that’s why she parked her car where she can look on. “There’s nothing wrong with my kid being right there.”

“In YOUR sense, maybe there’s nothing wrong,” Paz responds.

You bet, in her sense! She’s the mom. She cares far more about the child than Paz does — but he assumes she doesn’t. Because we’ve all been trained to judge parents mercilessly and assume the worst.

But the mom is right. There is nothing wrong with a child waiting a few minutes in a car.

Yes, I know we have been exhorted to believe every child in every parked car, even 10 feet from a parent, is in immediate danger of heat stroke or kidnapping. But in fact, the most dangerous thing the mom did that day was drive her child at all. Kids are in more danger in moving cars than parked ones, and yet we don’t make viral videos Â every time a mom drives her kid to the mall.

Fact: Of the 30-40 children who die in parked cars each year, 80% were either forgotten there (which was not happening here) or got in without anyone knowing and could not get out. They are found too late.Â That leaves about 10 children a year who die in cars where we don’t know exactly how it happened.

As for the odds of this child being in true danger, here’s the math I did for an essay at Cato Unbound, discussing a year in which 31 children died in cars (and for this I included all 31):

No. And by the way: more kids die in parking lots than in parked cars. (See this piece.)

What I appreciate about Paz is that he did NOT call the cops, because he knew that this could easily bring on a Child Protective Services investigation, and the family could be traumatized.

On the other hand, he posted the video including the licence plate, and now the police are apparently looking into the matter. Meantime, on Facebook, strangers are calling the mom a “bitch” and “crackhead” — which would make most of our own moms bitches and crackheads, because most of us waited out some errands in the car.

Here are two things that would actually make all kids safer:

2 – When you’re running an errand and it’s hot, roll down the windows. Our parents did that back when the crime rate was higher than today.

Unfortunately, the law in California is draconian. (As most laws are, when they are named for a child who died.) Larry Altman at The Daily Breeze reports:

Kaitlynâ€™s Law, signed by Gov. Gray Davis in 2001, makes it illegal to leave a child unattended in a motor vehicle. The law was named for Kaitlyn Russell, a 6-month-old who died in Riverside County in 2000 after a caregiver left her alone in a car for more than two hours on a 100-degree day.

Two hours in 100 degrees is a lot different from a brief errand on a day that was not 100 degrees.

I wish the mom well, even as she is raked over the coals for doing something so innocuous. – L 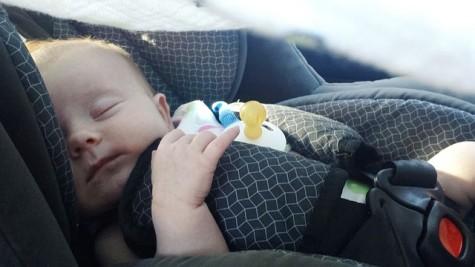 Letting a baby wait in the car for a short errand, close enough to even SEE him, is not negligent.

“Better Safe Than Sorry” is Wrong
19 y.o. on Sex Offender List for Consensual Teen Sex May — or May Not — Get Reprieve

283 Responses to Viral Video: Man Shames Mom for Leaving Baby in Car During Errand, Right in Front of Store