Readers — One of the fundamentals of Free-Range Kids is that kids are not in constant need of adult supervision. That includes adult-supervised enrichment. Some enrichment is fine — better than fine, it’s good! But replacing all free time with  adult-led activities is like replacing all whole grains with enriched white flour. At some point in society, we thought that was for the best. It was new and improved!

Now we are rethinking it. That’s why I love the work of Peter Gray, author of Free to Learn. I also appreciate this essay, “The Kids Don’t Play Anymore,”  by Globe and Mail columnist Margaret Wente. She’s disturbed by the fact she doesn’t see kids outside anymore.

“Play is a powerful way to impart social skills,” writes Peter Gray, an evolutionary psychologist who believes children’s lives have become ruinously regimented. Play also teaches children how to manage intense negative emotions, such as fear and anger, and to test themselves by taking manageable risks. Unstructured and unsupervised (oh, horrors!) play is crucial for their development.

“In play, children make their own decisions and solve their own problems,” Prof. Gray writes. “In adult-directed settings, children are weak and vulnerable. In play, they are strong and powerful. The play world is the child’s practice world for being an adult.” [Read the whole essay HERE.]

Play is starting to become the new cure-all for what ails kids. But unlike other cure-alls, it’s not a fad. It’s ancient. It’s innate. And it’s like cherries: Something good for kids that they automatically like.

Bring it back! maybe even starting today! – L. 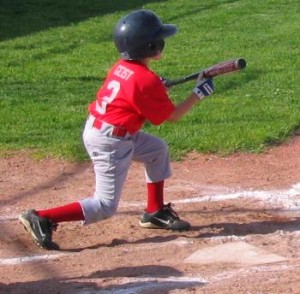 Kids need to organize their own games, too.

“I would rather scare my child than put flyers up with his picture on it!”
Barenaked Ladies: We Bow Down to You!