The Joey yrhhtyfdfy
Salads child abduction video purporting to help parents become more aware of stranger danger prompted me to write that this kind of scenario is far rarer than he suggests, and parents are already terrified enough. Then I got this troubling and very honest note:

I agree with your views in theory, but when I was 9 years old, I was tricked by a stranger to go with him and then assaulted and left for dead.Â  (And yes, I had been warned not to go with strangers by my school and my family.)

Skipping the details, as you can imagine, it affected my entire life from then on, as well as my parents and siblings.

My question to you is: yes, as a society we are over-protective.Â  But if one parent followed your advice and then their child was assaulted, or g-d forbid, killed, how would you feel?

I’m sure you’ve heard, and discounted, this argument before, but I didn’t know if you ever heard from an actual victim, as I know they are rare.Â But if we can do anything to prevent something like this from happening to another child, shouldn’t we?

First of all, I am so sorry and upset this happened to you. I wish you and your family every bit of joy and optimism that can be yours.

I would feel sad and grief-filled if this happened to another child, whether they were following my advice or not. (And my advice is probably the same as your own parents gave you: You can talk to anyone, you cannot go OFF with anyone.) And I would be very angry…at the criminal.

You’re right: I am always asked how I would feel if MY son had gotten on the subway and “never come home” — which is just a variation on, “What if something bad happened when you thought things would probably be fine?” The thing is: We all know how I’d feel. Stricken. So the question, when asked by the media (not you), isn’t asked out of curiosity. It is asked as a way of implying that I was wrong to not dwell upon the possibility of future grief and remorse before I allow my son Â out of my sight. And that if only I engaged in a little more proactive regret, I’d stop letting Â him do anything unsupervised.

This implies that when and if anything tragic happens to a child, it is the fault of the parents for not being vigilant enough. It legitimizes blaming the victim and/or the victim’s parents. But I hope you do not blame yourself for what happened to you, or your parents.

What no one ever says is this: “Why would you ever suggest someone drive their kid to your house, or class, or office? What if they got into a car accident on the way and died? How would you feel, knowing you had suggested they drive over?”

I don’t mean to be callous or dismissive. But letting kids go outside, talk to strangers, or get into the car to go to the dentist Â — these all come with a bit of risk. Letting kids take that “risk” is not dumb or foolhardy, and it shouldn’t be guilt-inducing, even though, after a tragedy we all tend to second-guess ourselves.

What we tend to do now is second-guess ourselves ahead of time. We imagine the remorse we’d feel, and say, “It’s not worth it.”

That’s why so many parks are empty.

So I don’t know if that helps at all, but my main point is: If a child is, God forbid, hurt when a parent lets him or her go outside, I will mourn. But I will not blame the parent or myself for not being able to predict the rare and unpredictable, any more than I’d blame the parent who drives her kid the three blocks to school fear of predators, and gets sideswiped by a truck. As someone once wrote to this blog: “Most of the bad things that happen to kids are as a result of bad luck. Not bad parenting.”

As I was mulling this over, I got an email from another reader that added a new perspective. It begins:

I watched this [Joey Salads child abduction] video the first time and fell into the trap with the other Facebook sheep, thinking this guy had just opened my eyes to something important. And then I watched it a second time on this blog and read all of these comments and realized you are all so right. This is pure fear-mongering. Unfortunately, my initial knee-jerk reaction of “OMG, that is crazy, my kid would totally do this!” stems from the fact that I was actually attacked and molested by a stranger in public when I was a child, and I have warned my kids about stranger danger because of that. My past has haunted me my whole life and my biggest fear is something similar (or worse) happening to my children. But what does living in fear do for people? Absolutely nothing. And the comments here actually help me to realize that more clearly.

There’s no way to guarantee absolute safety in any situation. But if we can agree not to blame anyone but the criminal, or bad luck, when kids are hurt, that might help at least a tiny bit to mitigate the pain.

I thank you both for your stories, and for the question about foresight and regret, which comes up often. It is indeed a vexing one. – L. 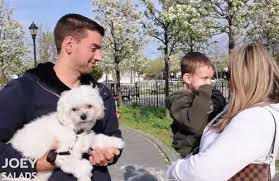 Should we imagine the worst case scenario before we let our kids have any independence?Â

Lenore and Peter Gray Together on “Take Our Kids to the Park…” Day!
If A Tree Falls and Nobody Turns It Into a Cautionary Tale for Parents…

74 Responses to “What if Someone Follows Your Advice and Their Child Is Abducted by a Stranger — Like I Was?”